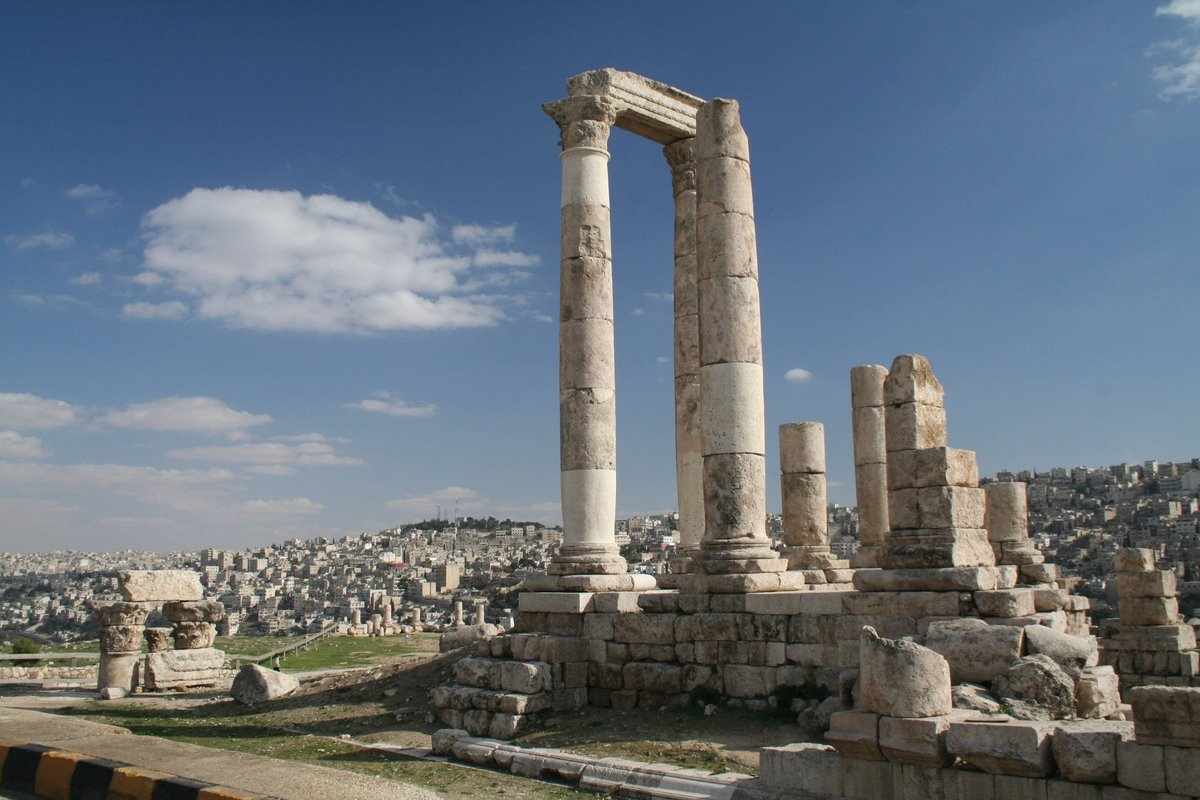 Amman‎ is the capital and largest city of Jordan, one of the oldest inhabited places in world. It is Jordan's political, cultural, commercial center and one of the major tourist destination in the region especially popular among Gulf tourists.

It is a fascinating city of contrasts – a unique blend of old and new, ideally situated on a hilly area between the desert and the fertile Jordan Valley. The city is generally well-appointed for the traveler, reasonably well-organized, and the people are very friendly.

Amman is among the most popular locations for multinational corporations to set up their regional offices, alongside Doha and only behind Dubai. It is a major tourist destination in the region and the capital is especially popular among Gulf tourists.

There are places to visit as, The Roman Theatre,a Roman-era Nymphaeum, an Ammonite-era watchtower, the Citadel ,the Temple of  Herakles , the Byzantine Church, the Ummayad Palace Darat al Funun and  Monument to the Unknown Soldier.

Darat al Funun or 'small house of the arts' in Jabal el Weibdeh, overlooking the heart of Amman, is housed in three adjacent villas from the 1920s (and the remains of a sixth-century Byzantine church built over a Roman Temple).

Today, West Amman is a lively, modern city. The eastern part of the city, where the majority of Amman's residents live, is predominantly the residential area of the working class and is much older than the west. While possessing few sites itself, Amman makes a comfortable base from which to explore the northwestern parts of the country.

The cultural scene in Amman has seen some increased activities, notably cultural centers and clubs such as Makan House, Al Balad Theater, the Amman Filmmakers Cooperative, Remall, and Zara gallery. Around the 1st of September the Jordan Short Film Festival takes place. The people of Amman are welcome visitors and take pride in showing them.

Is Jordan safe to travel?

Jordan is safe to visit with notable low crime rate, tourist attractions are well secured and there is no common negative attitude towards foreigners, with some sensible precautions and preparations you will feel at home and as safe as you'll ever be.

What to wear when visiting Jordan?

How to get visa to Jordan?

Valid Passport with 6 months validity beyond your travel schedule is a must. All Visitors to Jordan that are not citizens of Turkey or certain Arab countries are required to have a visa to enter Jordan.

What language is spoken in Jordan?

Arabic is the most commonly spoken language in Egypt, it is also the national language in the country but JJordanians speak and understand English as they study it in school. Fewer Jordanians can speak other languages like French, Italian, Spanish, and German. Jordanians working in tourism sector are accustomed to speak enough English and other languages to fulfill the needs of most travelers.

What airlines fly to Jordan?

Jordan is very connected to the world, it has many direct flights with Africa, Asia, European Union and United States.

Can non Muslim go inside mosque in Jordan?

What is unique about your Jordan packages?

Being one of the leading players in travel industry since 1955, we offer a wide range of Jordan packages. Ensuring that your Jordan tour with us would be a lifetime experience with flexible Jordan tour itineraries, competitive prices, excellent customer service and multiple payment facilities. If you plan a tour to Jordan, here is the place you better look in. Whatever your Jordan travel plans, you will find range of Jordan holiday packages. Whether you plan for tour packages to Jordan for small group, singles, solo traveler, private, family or a couple, whether you need escorted Jordan tour packages for your parents or an unusual Jordan holidays and package for yourself, we can help you to tailor your holiday in Jordan as we offer many tour packages to Jordan with prices starting from 300 Usd. Uncover a set of Jordan holiday itineraries and pick from best Jordan travel packages with flights and without. Remeber to add more activities to your choosen Jordan tours and packages, we also categorize holiday packages to Jordan by topic to find your suitable interest. Whether you look for adventure Jordan packages or romantic vacations in Jordan, you will find it here. Being short trip to Jordan or long stay Jordan holiday we have the right Jordan vacation packages for you to select from. Planning Jordan cheap tours or luxury holiday in Jordan? browse our collection of vacation packages to Jordan to indulge you on your Jordan vacations and package at your desired budget. Browse Jordan Packages from Usa, Uk, Canada, Austraia, India, Europe, Aisa and Africa. Get prepared for your Jordan vacation reading our tips about the best time to visit Jordan, Jordan tourism & things to do in Jordan.

What is Jordan best known for?

What currency is used in Jordan?

The currency in Jordan is the Jordanian Dinar, it is about 0.71 to USD. Money exchange is widely available and Credit cards are largely used.

What type of hotels are there in Jordan? check-in time?

Jordan enjoys big hotel variety from world class luxury to simple hostel accommodations; Check in time in most hotels in Jordan is around midday, 12 or 1 PM.