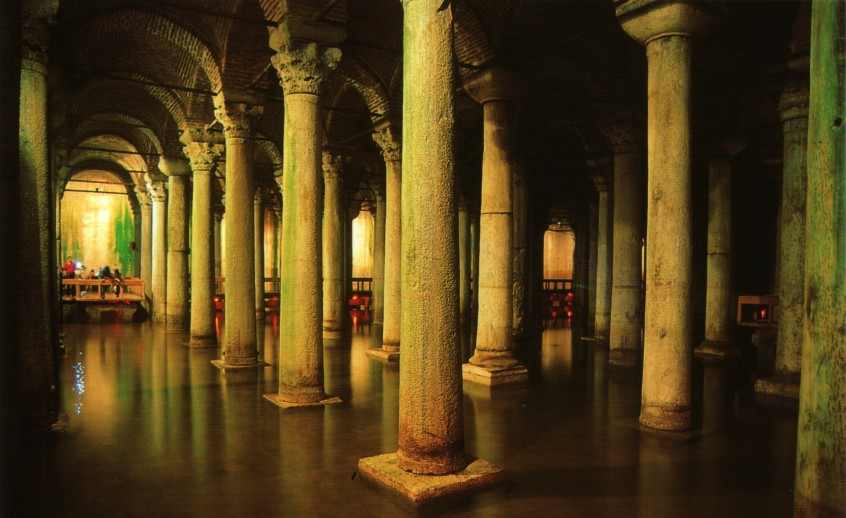 There are hundreds of ancient cisterns hidden underneath the streets and houses of Istanbul. Of the two that are open to the public, the Basilica Cistern. Located 150 m southwest of the Hagia Sophia on the historical peninsula of Sarayburnu.

The Basilica Cistern is the largest of several hundred ancient cisterns that lie beneath the city of Istanbul , Turkey. It is the largest and Istanbul’s most unusual tourist attraction.

The Stoa Basilica, beneath which it was originally constructed. Before being converted to a cistern, a great Basilica stood in its place, built between the 3rd and 4th centuries during the Early Roman Age as a commercial, legal and artistic centre.

The basilica was reconstructed by Ilius after a fire in 476. Remember the scene in the old James Bond movie From Russia With Love when Bond is rowing in a small boat through a forest of marble columns. That scene was filmed in Yerebatan.

Yerebatan is in Sultanahmet Square, at the northeastern end of the Hippodrome, just off Divan Yolu, and across the street from Ayasofya (Hagia Sophia) .

The entrance (see the photo to the right) is on Yerebatan Caddesi; the exit is opposite Ayasofya on Alemdar Caddesi. Make sure you walk all the way to the far left-hand corner of the cistern, to see the two Medusa heads (see pictures of the Basilica Cistern).

Both heads are casually used as column bases; one positioned upside down, the other tilted to the side. Both their positioning as their origin remain a mystery up till now, although rumor has it that they were recycled form an antique building of the late Roman period.

The enlarged cistern provided a water filtration system for the Great Palace of Constantinople and other buildings on the First Hill, and continued to provide water to the Topkapi Palace after the Ottoman conquest in 1453 and into modern times.