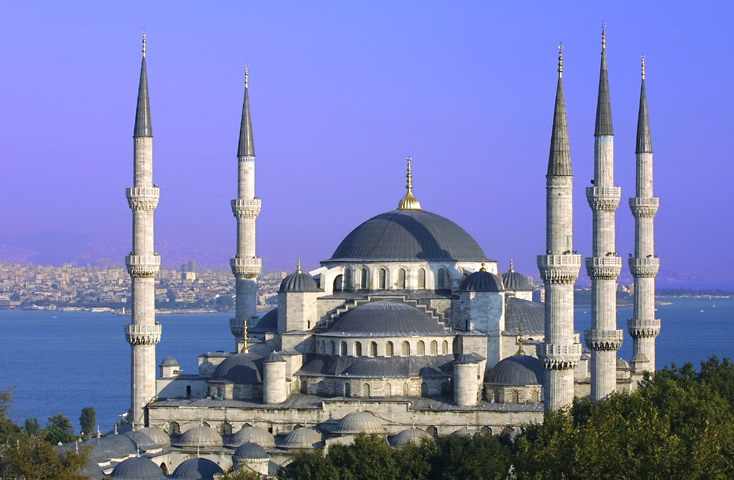 The Blue Mosque is the National Mosque of Turkey and the supreme Imperial Mosque of the Ottoman Empire. It was built in the early 17th century. Its name is derived from the blue tiles decorating its interior.

Byzantine and Islamic in design, the mosque, from minarets to interior decorations, is spectacular and Its grace and beautiful proportions were intended to reflect the splendor of Islam.

Built by Sultan Ahmet I in 1609-16. The forecourt, with a beautiful fountain in the center, is surrounded by colonnades roofed with a series of small domes.

The interior (72m/235ft by 64m/210ft), in its lightness, spatial effect and color, is one of the finest creations of Turkish architecture.

The Blue Mosque has also become one of the most popular tourist attractions in Istanbul. Only worshippers are admitted through the main door; tourists must use the south door.

The architect who oversaw its design was Sedefkar Mehmet Aga, better known as a student of Sinan (the greatest architect ever seen in the Ottoman Empire).

Not only was it built to serve as a mosque, but its huge surrounding complex also held a medrese (theological school), turbe (tomb), hospital, caravanserai, primary school, public kitchen and market, although the hospital and caravanserai were destroyed in the nineteenth century.

The Blue Mosque is open all day except during prayer times.