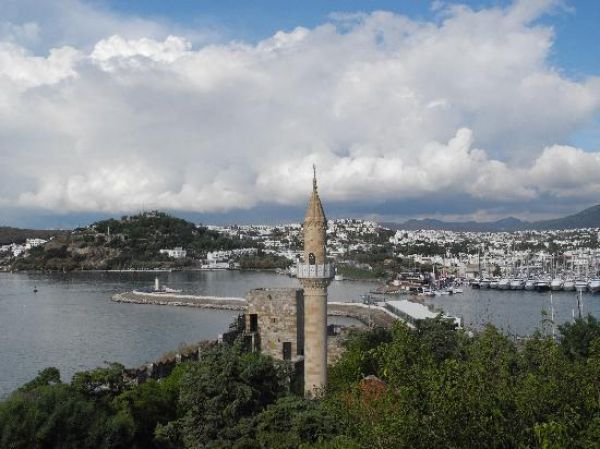 Bodrum is a district in Muğla Province, southwestern Aegean Region of Turkey. Bodrum has a pleasing contrast between the Ancient city - where there are discernible fragments everywhere in the town and a playground for rich Turks and an array of foreign visitors.

The location of the famous Mausoleum of Halikarnassus (built after 353 BCE), one of the Seven Wonders of the Ancient World. Unfortunately, the ancient monument was destroyed by earthquakes in the Middle Ages - some of the remnants can be seen in London's British Museum.

It is one of the centers of the Turkish Tourist industry and is the market town for the Bodrum Peninsula which consists of a number of towns and villages nestling on the edge of the Coast.

The region includes the municipalities of Bodrum, Turgutreis, Ortakent, Türkbükü, Yalıkavak, Gümüşlük, Bitez, Konacık, Yalı and Mumcular; with many tourist-oriented developments being constructed across the district area.

Bodrum Castle / Castle of St Peter Built from 1402 by the Knights Hospitaller, the Castle is easily the most prominent landmark in the city. The castle now operates as a museum, with the focus on the Museum of Underwater Archaeology (see below). It is one of the world's best preserved monuments dating back to medieval times.

The Bodrum Amphitheatre is another ancient structure accredited to the reign of King Mausolus, although it wasn’t completed until the Roman era.

The theatre is another witness to the great past of Bodrum, and it is one of the best preserved structures of ancient Halikarnassus. You can find this site on the road to Gumbet.

A windmill in Bodrum is one of the many sights in the Bodrum peninsula are the white windmills, which were made of stone and lined with wooden planks.

Bodrum Museum of Underwater Archaeology, established in 1961, this great museum has won numerous awards, and displays amazing finds from underwater excavations along the Turkish coast. Includes the famous Uluburun Shipwreck, one of the earliest and richest wrecks yet discovered. Not to be missed.