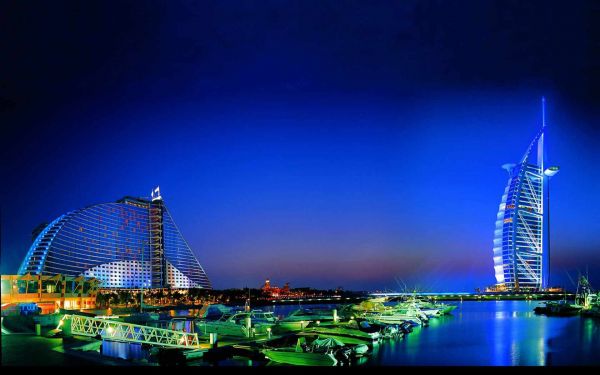 The shape of the structure is designed to mimic the sail of a ship. It was designed by architect Tom Wright of Atkins. The design and construction were managed by Canadian engineer Rick Gregory also of WS Atkins. Construction of the Island began in 1994.

The Burj Al Arab (Tower of the Arabs) is the world's only 7 star hotel and designed to resemble a billowing sail, the Burj Al Arab soars to a height of 321 meters, dominating the Dubai skyline making it the fourth tallest hotel in the world.

It was built to resemble the sail of a dhow, a type of Arabian vessel. Two "wings" spread in a V to form a vast "mast", while the space between them is enclosed in a massive atrium.

The architect Tom Wright said "The client wanted a building that would become an iconic or symbolic statement for Dubai; this is very similar to Sydney with its Opera House, London with Big Ben, or Paris with the Eiffel Tower.

It needed to be a building that would become synonymous with the name of the country." The hotel rests on an artificial island constructed 280 m (920 ft) offshore. To secure a foundation, the builders drove 230 forty-meter (130 ft) long concrete piles into the sand.