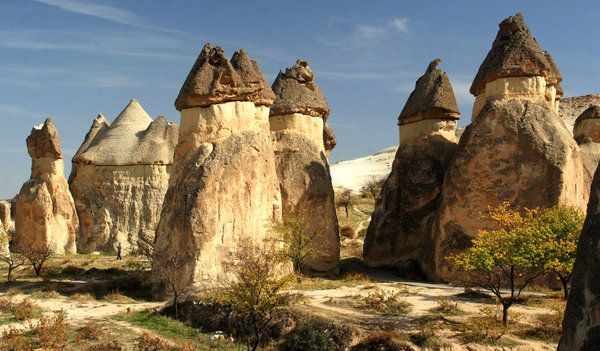 One of the most important places in the spreading periods of the Christian religion. The first Christians trying to escape from the Roman soldiers have settled in this region which was so suitable for hiding so they were able to continue spreading their religion.

Cappadocia Turkey is the historic area of central Anatolia. It is best known for its unique moon like landscape, underground cities, cave churches and houses carved in the rocks. It was known as Cappadocia in ancient times, and is still called Kapadokya informally today.

Cappadocia which is unique in the world and is a miraculous nature wonder is the common name of the field covered by the provinces of Aksaray, Nevsehir, Nigde, Kayseri and Kirsehir in the Central Anatolian region.

The name was traditionally used in Christian sources throughout history and is still widely used as an international tourism concept to define a region of exceptional natural wonders, in particular characterized by fairy chimneys and a unique historical and cultural heritage.

The first populations of the region of Cappadocia were Hatties, Luvies and Hittites. In the 3000-2000 years B.C. the Assyrians have established trade colonies in this region. The Cappaddocian tables with cuneiform in Assyrian language founded at Kanes which are lighting the social and politic life of the period and were in the same time the trade and economical agreements are the first written tablets of Anatolia.

According to these documents in that period in Anatolia were founded small local kingdoms non-depending from a central authority. These had in generally in their hands a little area and were living in peace. The region creating the core of the Hittite Empire later has go under the domination of Phrigia and Pers.