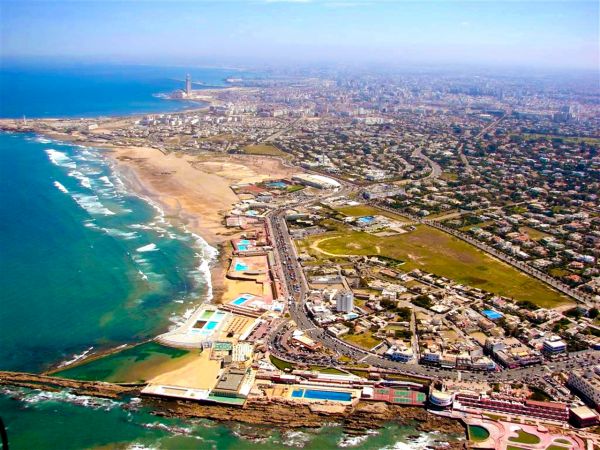 Casablanca, industrial and economic heart of Morocco, the biggest city in Maghreb region & one of the less endearing of the country's sights. Casablanca hosts headquarters and main industrial facilities for Moroccan & international companies.

Industrial statistics show Casablanca retains its historical position as the main industrial zone of the country. The Port of Casablanca is one of the largest artificial ports in the world, and the largest port of North Africa. It is also the primary naval base for the Royal Moroccan Navy.

Casablanca is full of contradictions. It is home to suffocating traffic jams, simmering social problems and huge shanty towns as well as wide boulevards, well-kept public parks, fountains and striking colonial architecture. The bleak facades of the suburbs stand in sharp contrast to the Hispano-Moorish, art-deco and modernist gems of the city centre, and to Casablanca’s modernist landmark, the enormous and incredibly ornate Hassan II Mosque.

Hassan II Mosque, designed by the French architect Michel Pinseau. It is situated on a promontory on the Atlantic. The mosque has room for 25,000 worshippers inside, and a further 80,000 can be accommodated in the mosque's courtyard. Its minaret is the world's tallest at 210 meters. The mosque is also the largest in North Africa and the third largest in the world.

On its edge is the Casablanca Cathedral . It is no longer in use for religious purposes, but it is open to visitors and a splendid example of Moresque architecture. The Old Medina  attracts fewer tourists than the medinas of cities like Fes and Marrakech. However, it has undergone some restoration in recent years. Included in this project have been the western walls of the medina, its skala, or bastion, and its colonial-period clock tower.

Casablanca has a very mild Mediterranean climate (Köppen climate classification Csa). Casablanca's climate is strongly influenced by the cool currents of the Atlantic Ocean which tends to moderate temperature swings and produce a remarkably mild climate with little seasonal temperature variation and a lack of extreme heat and cold.