Trips From Hurghada to Pyramids 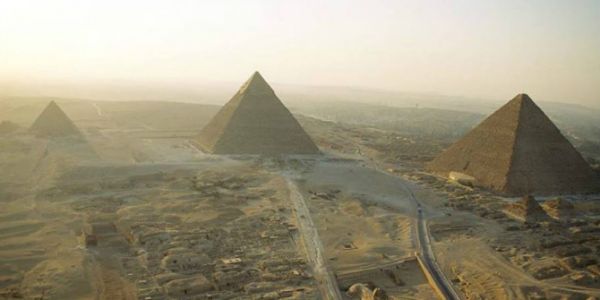 Trips From Hurghada to Pyramids Overview

A vacation in Hurghada would be awesome. You would be spending your time chilling on the amazing beaches, enjoying snorkeling and diving in one of the richest location around the world, or have magnificent fun in a jet ski, a banana boat, or a glass boat.

While enjoying your holidays on the beaches of the Red Sea in Hurghada, never miss the chance to discover the secrets of the Pyramids of Giza. Day trips from Hurghada to the Pyramids would be an amazing experience you wouldn’t want to miss.

This seems startling, right? Why don’t you add even more excitement to your trip and enjoy tours from Hurghada to the Pyramids of Giza? These trips are wonderfully organized and gives you the opportunity to explore the most popular monument in the world!

Either by vehicles or by direct flights, it is always worth it to visit Cairo, the capital of Egypt and one of the most interesting cities in the entire globe.

Arriving in Cairo, you would explore the Pyramids of Giza. Constructed around the 25th century BC, the pyramids served as the royal tombs of the kings of Egypt during the 4th dynasty of ancient Egypt. The construction of the Pyramids of Giza, especially the Great Pyramid of Cheops, is still a mystery until today.

Establishing such huge structures with quite accurate measurements and in ancient times when there were no advanced technologies is quite breathtaking. There are three major pyramids in Giza, the Grand Pyramid of Cheops, the medium pyramid of Khafre, and the smallest Pyramid of Menkaure.

Another monument you would regarding during your day trip from Hurghada to Giza Pyramids is the Sphinx. Constructed likely in the reign of Khafre, this huge stone carved statue of a lion with the head of a pharaoh, guarded the Pyramids of Giza for thousands of years.

After enjoying your day trip from Hurghada to the Pyramids, you would have lunch in one wonderful restaurant. Afterwards, you have the option to explore more monuments in Cairo like the Egyptian Museum, Saladin Citadel, and Khan El Khalili.

Trips From Hurghada to Pyramids 2020

Related to Trips From Hurghada to Pyramids

Is Egypt safe to travel?

Egypt is safe country to visit with notable low crime rate, tourist attractions are well secured and there is no common negative attitude towards foreigners, with some sensible precautions and preparations you will feel at home and as safe as you'll ever be.

What to wear when visiting Egypt?

How to get visa to Egypt
Visitors to Egypt must obtain a visa from one of the Egyptian diplomatic missions or apply and pay online for one month visa to Egypt through Egypt E-Visa Portal. Valid Passport with 6 months validity beyond your travel schedule is a must, visitors from Australia, Canada, Croatia, European Union, Georgia, Japan, New Zealand, Norway, Macedonia, Republic of Korea, Russian Federation, Serbia, Ukraine, United Kingdom and United States can purchase a one month visa upon arrival.
What language is spoken in Egypt?

Egyptian Arabic is the most commonly spoken language in Egypt, it is also the national language in the country but Egyptians speak and understand English as they study it in school. Fewer Egyptians can speak other languages like French, Italian, Spanish, and German. Egyptians working in tourism sector are accustomed to speak enough English and other languages to fulfill the needs of most travelers.

What airlines fly to Egypt?

Egypt is very connected to the world, it has many direct flights with Africa, Asia, European Union and United States. Visit Cairo Airport website for a full list of Airlines that fly to Egypt.

What is the duty free allowance for Egypt?

What time does the Pyramid open?

Giza Pyramids and most monuments and Museums in Egypt open between 8 Am to 5 Pm. During Ramadan, the holy month of the Islamic calendar, be aware that these hours will change significantly.

What are the opening hours for shops in Egypt?

Shops and stores in Egypt are usually opened from 10 Am to 10 Pm however in major cities it opens much later and some are open 24 hours.

Can non Muslim go inside mosque in Egypt?

Can you take pictures in Egypt?

Taking pictures for people and streets is fine after people permission While Taking pictures for official type or army structures is not permitted. In most historical sites and museums in Egypt it is allowed to use camera,  some of them may charge you for camera but at the Egyptian Museum and some similar historical sites it is prohibited and you will be asked to leave camera at reception before entering.

What type of hotels are there in Egypt? check-in time?

Egypt enjoys big hotel variety from world class luxury to simple hostel accommodations; Check in time in most hotels in Egypt is around midday, 12 or 1 PM.

Do you need any vaccinations to go to Egypt?

There in no health concerns or vaccinations required to visit Egypt but we recommend to check with your own doctor, he knows you and your medical history best.

What currency is used in Egypt?

The currency in Egypt is the Egyptian pound (LE), it is about ,06 to USD. Money exchange is widely available, Credit cards are largely used in Egypt major cities and tourist spots.

How to get around in Egypt?

We do not recommend the public buses in big cities. Taxi and limousine service are fine every where but price is negotiable. Trains go to all big cities in Egypt except Sinai and the Red Sea. Flights from / to tourist cities are always available.

How much to tip in Egypt?

Tipping in Egypt is an appreciated habitual attitude but is Not obligatory. Generally 5 to 10 EGP for small favors is fine for carrying luggage, parking a car or to guys who clean bathrooms. 10 % is fine in restaurant and spa. Tipping your tour guide and vehicle driver should be considered if you're provided with good to great service, feel free to give what you think your experience was worth.