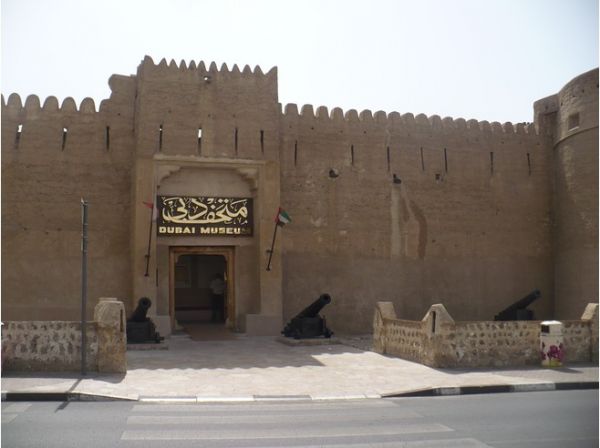 Dubai Museum includes archaeological objects such as pottery, stone and metallic items, stone engravings, and skeletons which were discovered during digs in the Emirate of Dubai, some pieces date back 4000 years.

Dubai Museum is the main museum in Dubai, located in Al Fahidi Fort, built in 1787 and is the oldest existing building in Dubai.

Al Fahidi Fort is square-shaped with towers occupying three of its corners. It was built of coral rock and mortar in several phases. Just off the southern wall lie the remains of the city walls.

Next to them stands a tall dhow (traditional boat) in the middle of a large courtyard that covers the underground galleries. Two cannons guard the main gate to the fort on the eastern wall, adorned by flags of Dubai and the United Arab Emirates.

Renovated in 1971 for use as a museum, its colorful life size dioramas vividly depict everyday life in the days before the discovery of oil. Galleries recreate scenes from the Creek, traditional Arab houses, mosques, the souk, date farms and desert and marine life.

One of the more spectacular exhibits portrays pearl diving, including sets of pearl merchants’ weights, scales and sieves. Also on display, are artifacts from several excavations in the emirate, recovered from graves that date back to the third millennium BC.

A large section is devoted to musical instruments, with displays of drums, flutes, lyres, bagpipes made of goatskin and other locally-made instruments. Deadly weaponry on display includes curved daggers (hanjars), swords, spears, bows and arrows, shields made of sharkskin, pistols and axes.

A model of a wind-tower room is an interesting feature of the architecture section, with diagrams and photographs showing different types of wind-towers from the older areas of Dubai city.

In the past the fort was used to defend the town from warlike neighboring tribes. It has also served as the seat of government, the ruler's residence, a store for ammunition and a jail. The walls are built from coral and shell rubble from the sea, cemented together with lime.