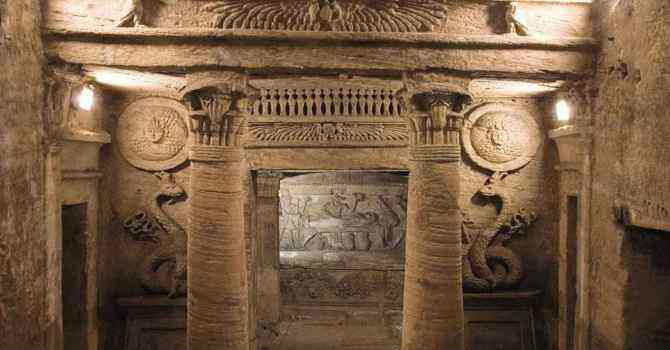 We will pick you up from the exit door of your cruise ship in Alexandria port with private modern van and your own Egyptologist guide to wander the catacombs of Kom Al Shuqqafa, it is Roman burial place dedicated to a Roman family then turned into public tomb, it uncovers the merging of Egyptian and Roman art.

Proceed to Pompey Pillar, 25 meter granite column established to honor the Emperor Diocletian who released the blockade city and brought food to its hungry people. Get your lunch in local SEA FOOD restaurant then move onto Alexandria Library, it contains mimic of approximate every book published in the world the matter makes it one of the biggest literary spots in the world.

Stop at the famed Morsy Abul Abbas mosque, it is one of the most known mosques in Egypt and Arab World. End the tour and drive back to Alexandria Port.