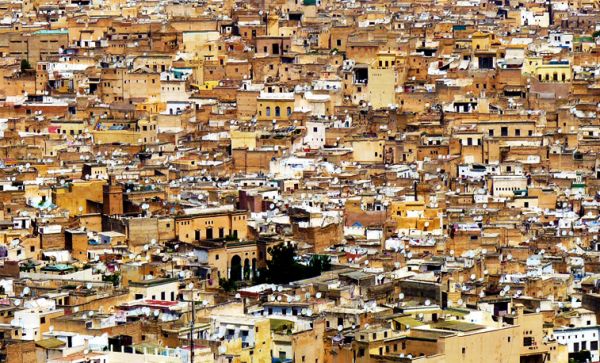 Fes is Morocco's oldest Imperial city Built by the Merenides in the 13th century and it is now a UNESCO World Heritage site. Fez is the country's cultural & spiritual center. Its mosque is the holiest in country and governs the timing of Ramadan and Islamic festivals.

Most of the area was occupied by a royal palace, one of the most sumptuous and complex in Morocco, surrounded by beautiful gardens. Unfortunately, access to the palace is now restricted to special guests.

It is still considered Morocco's premier religious city by virtue of its Islamic traditions. It is the site of Qarawiyyin Mosque (the largest mosque in North Africa) and Qarawiyyin Madrasah, and is also the burial place of Moulay Idris II.

The best time to visit Fes is from September to November and April to June. It's not too hot and there are fewer tourists. The Fes Festival of World Sacred Music is usually held in June and is certainly worth planning your trip around.

There are enough sights here to fill a few days of rambling exploration just trying to locate them!

Fes el Bali, if you’re a first-time visitor to Fes el Bali, it’s a good idea to pay for a guide to show you around as the Medina is fairly complex and you could easily get lost in its intricate web of alleys. That said, you could always make your own way and enjoy the fascination of stumbling across the innumerable sights. The Medina is not dangerous at all and you could always ask people to lead you out towards its monuments.

Bab Boujloud is considered the most beautiful gate entrance to Fes el Bali. Its surrounding area is a place packed with stalls and cafes where locals meet and talk. Bab Boujloud has beautiful blue tiled facades facing the ramparts on the outside and green in the interior, facing the Medina.

Dar Batha is an elegant late nineteenth-century palace designed for the reception of foreign ambassadors and now serving as a Museum of Moroccan Arts and Crafts.

The Museum has a one of the finest handicraft collections in Morocco. The focus is very much on local crafts: carved wood, much of which is rescued from local medersas, Berber carpets from the Middle Atlas, embroidery stitched with real gold and illuminated Korans.

The Bou Inania Medersa is one of the most beautiful and extravagant monuments in Fez. This Merenid monument is infinitely splendid and almost perfect in every aspect – its carved cedar is a masterpiece of handcrafted sculpture involving endless hours of pinpoint concentration.

The Zaouia of Moulay Idriss is one of the holiest shrines in Fez. Originally built by the Idrissi Dynasty in the 6th century to honor their founder, it has been restored by the Merenid rulers in the 13th century.
Until the building of the Hassan II Mosque in Casablanca, the Kairaouine Mosque was the largest mosque in Morocco and along with Al Azhar in Cairo one of the oldest Islamic universities in the world.
The mosque dates back to 857 but its current dimensions – 16 aisles and a room for 20 000 worshippers - are largely the work of 13th century Almoravids.

After the Bou Inania Medersa, The Medersa el Attarin is the most accomplished of Fez medieval Islamic schools. It was completed by the Medernid Sultan Abou Said in 1325 and thus one of the most ancient in town.

The dyers’ souk - or Souk es Sebbaghin in Arabic, Rue des Tanneries in French - is just below the Seffarine Medersa.