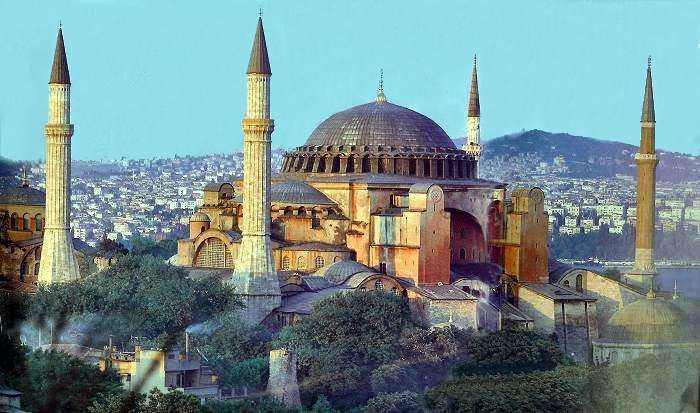 One of top Attractions in Istanbul, Hagia Sophia is a former Orthodox patriarchal basilica, later a mosque, and now a museum. The Hagia Sophia was the largest cathedral in the world for over a millennium, it is one of the de facto city symbols of Istanbul.

The sheer apex of Byzantine architecture and design, the pre-eminent landmark is remarkable. This massive 6th century building in the old city quarter is the third church to be built at the same location. The first church was built in 360 AD but burnt down in 404, during the reign of Constantine.

The second was erected between the years 404-415, but shared the same fatal destiny as the first one, burning down during the Nika revolt in 532, during the reign of Justinian. After these riots, a new structure (the current one standing) was ordered from two famous architects - Isidorus and Anthemeios.

It was completed and opened to the public on December 26th in 537, on the St. Stephen's day. However, the dome collapsed twenty years later and it had to be rebuilt by the nephew of the first architect. He opened up the dome by giving it 40 windows along its parameter.

The Hagia Sophia has a classical basilica plan. The main ground plan of the building is a rectangle. The main dome is carried on pendentives: four concave triangular sections of masonry which solve the problem of setting the circular base of a dome on a rectangular base. Each pendentive is decorated with a seraphim.

Just outside the entrance, stone cannonballs line the gravel path of the outer courtyard. These are the actual cannonballs used by Mehmet the Conqueror in his victorious 1453 battle for the city. The Islamic calligraphic roundels suspended from the main dome since the 19th century remain in place and make for a fascinating religious contrast with the uncovered Christian mosaics.

Hagia Sophia, the Church of Divine Wisdom, stands as one of the landmarks of the city.