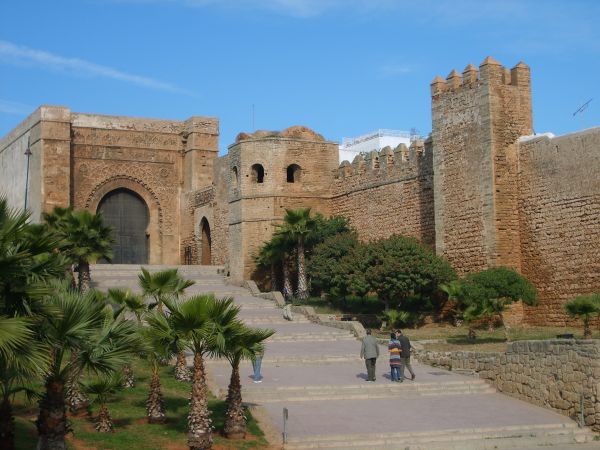 Kasbah of The Udayas Overview

Like most other cities in Morocco, Rabat is old and has a lot of historical value. It was built during the reign of the Almohads. When the Almohads had captured Rabat and destroyed the kasbah of the Almoravids in the town, they began reconstructing it in AH 544 / AD 1150.

The Kasbah des Oudaias is a picturesque place with houses and streets that are of a different standard to the rest of the city. All the houses are white and look like they have just been painted with bright blue parapets. The Kasbah des Oudaias provides you with the most amazing views of the Atlantic Ocean and of Sale, Rabat's neighboring city.

This part of city is quiet and there are relatively few people walking around the maze of streets. This makes exploring the northern parts of the city a lot more fun. The most dramatic entry to the kasbah is through the enormous Almohad gate of Bab Oudaia, built in 1195. Its location, facing the heart of the city and just outside the original palace, made it more ceremonial than defensive and the gateway is elaborately decorated with a series of carved arches.

Inside the gateway, the main street, Rue Jamaa, runs straight through the kasbah. About 200m ahead on the left is the oldest mosque in Rabat, built in the 12th century and restored in the 18th.

Another attraction that visitors come to see is the fragrant smelling Andalucian Gardens. The garden is full of brightly colored flowers and is a pleasure to walk through. Near the Andalucian Gardens is a palace that was built in the 17th century and now is home to the Oudaias Museum. The palace was built under the reign of Moulay Ismail who gained rulership at the age of twenty-six. Kasbah des Oudaia and all its attractions make it a popular tourist destination.

Kasbah of The Udayas Tours

Beyond Kasbah of The Udayas