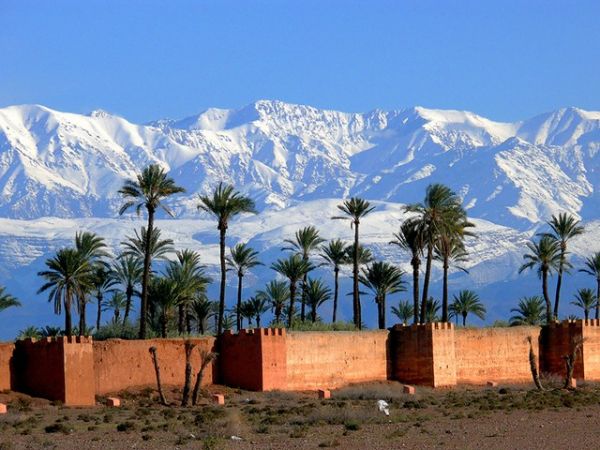 Morocco's top destinations for tourists. Marrakesh is also famous for its beaches and some the best seaside towns are represented by Essaouira, Tangier and Asilah. Natural wonders of Morocco include Atlas Mountains, Sahara desert & Dades Valley.

Marrakesh or Marrakech is a major city in the northwest African nation of Morocco. It is the third largest city in Morocco after Casablanca and Rabat, and lies near the foothills of the snow capped Atlas Mountains and a few hours away from the foot of the Sahara Desert. Its location and contrasting landscape has made it an enviable destination in Morocco.

The city is divided into two distinct parts: the Medina, the historical city, and the new European modern district called Gueliz or Ville Nouvelle. The Medina is full of intertwining narrow passageways and local shops full of character. In contrast, Gueliz plays host to modern restaurants, fast food chains and big brand stores.
Djemaa el Fna is the most famous landmark in Marrakech, a place sure to involve you so effortlessly you will come back again and again.

It is an open space in the heart of the city where a long-established ritual takes place. Large crowds of onlookers – both locals and tourists.

The Koutoubia is to Marrakech what the Statue of Liberty is to New York and the Eiffel Tower is to Paris. Nearly seventy meters in height and visible for miles afar, the Koutoubia is a landmark that dominates the whole of Marrakech, rising from the low-rise buildings of the old town and the plains of the north.

The souks of Marrakech stretch immediately after Djemaa el Fna, along Rue Souk Smarine, a long, covered street. At the end of this street are two lanes: Souk el Kbir and Souk el Attarin – Follow the alleyways and you will discover small squares devoted to specific crafts and products.

Opposite the Ben Youssef Mosque, on the southern side of Place de la Kissaria, is the Almoravid Koubba. At first glance, it looks a very simple building with variously shaped doors and windows. With a closer look, you will understand the significance and fascination of this monument, for it is the only Almoravid building still standing intact in Morocco!

The Marrakech Museum is housed in a magnificent late-nineteenth century palace, Dar Mnebbi, on the west side of Place de la Kissaria.

The Mellah, east of the Medina, used to be the Jewish quarters in Marrakech. It was here that sultan Abdullah Al-Ghalib moved the Jews to his protected Kasbah in 1558.

The Bahia Palace, the “Brilliant”, is the perfect antidote to the simplicity of the nearby Al Badi Palace. Originally built in 1867 by Si Moussa, a grand vizier of Moulay Hassan, it was enlarged by his son Bou Ahmed, who added a mosque, a hammam and a garden.

The Majorelle Garden is a small, meticulously planned botanical garden just off Avenue Yacob al Mansour. The garden bears the name of its creator in the 1920s, French painter Jacques Majorelle.