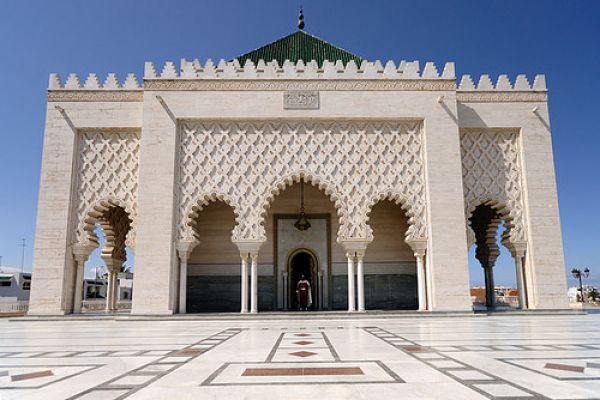 The building is considered a masterpiece of modern Alaouite dynasty architecture, with its white silhouette, topped by a typical green tiled roof, green being the color of Islam.

A reader of the Koran is often present, having his assigned seat. Its construction was completed in 1971. Hassan II was buried there following his death in 1999.

The Mausoleum is richly decorated with elaborate zellij mosaics from floor to ceiling. The Hassan Tower or Tour Hassan is the minaret of an incomplete mosque, whose construction started in 1195 but was never completed.

Commissioned by King Hassan II in 1962 and completed in 1971, the Mausoleum of Mohammed V is a white building crowned with green tiles. Inside, the mausoleum is lavishly decorated and adorned with a wealth of traditional artwork.

Together with its namesake, the Mausoleum of Mohammed V is also the final resting place of King Hassan II and Prince Abdallah, his two sons.

The interior has been finished in white marble and granite floors and walls and a beautiful granite block with a headstone indicates the final resting place of the great king.

The sliding doors and ceiling have also been carved in breathtaking motifs and designs. Spectacular chandeliers light up the room that is complete with red carpets on the stairs and flags.

This spectacular site and popular attraction in Rabat is an architectural marvel and a monument to a great ruler. Visitors will not be disappointed as it is truly a final resting place fit for a king.