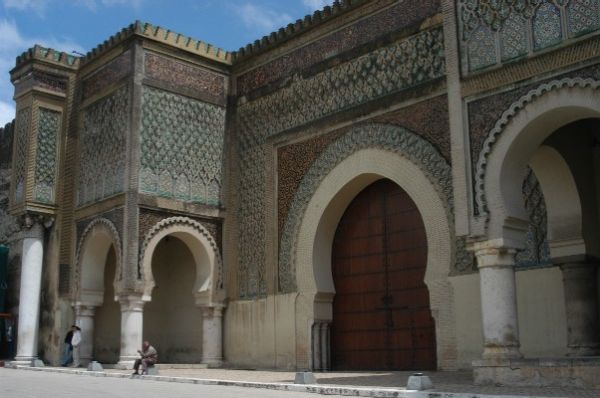 Meknes is a city in northern Morocco, 130 kilometres from Rabat and 60 kilometres from Fes. It’s also more laid-back and less hassle but still awash with the winding narrow medina streets and grand buildings befitting a one time capital of the sultanate.

While Meknes is an imperial city with a lot of historical monuments and natural sites; it is also the nearest city to the Roman ruins of Volubilis (Oualili). The prices in Meknes are among the most reasonable in Morocco and the people are much more polite and nicer than in the other cities.

Bab Mansour gate, named after the architect, El-Mansour. It was completed 5 years after Moulay Ismail's death, in 1732. The design of the gate plays with Almohad patterns. It has zellij mosaics of excellent quality.

The marble columns were taken from the Roman ruins of Volubilis. When the structure was completed, Moulay Ismail inspected the gate, asking El-Mansur if he could do better.

El-Mansur felt complied to answer yes; making the sultan so furious he had him executed. Still, according to historical records, the gate was finished after Moulay Ismail's death. The gate itself is now used as an arts and crafts gallery; entry is by a side gate.

The Grand Mosque, founded in the 11th century by the Almoravids. It has 11 gates and 143 arcades.
Dar El Beida, a 19th century palace built by sultan Mohammed ben Abdallah. It is currently home to the Royal Military Academy.

The Bab Berdieyinne mosque constructed in the 17th century, is located in the historical city center. On 19 February 2010, its minaret collapsed during Friday prayers, causing at least 41 fatalities and many injuries. The area had received heavy rain over the preceding days. King Mohammed VI ordered the minaret be rebuilt according to historical specifications.