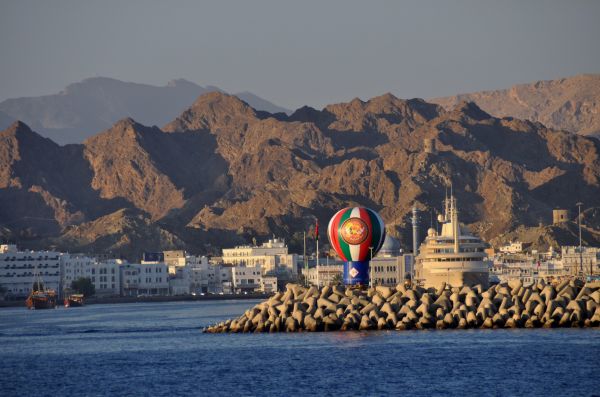 Muscat is the capital of Oman, the etymology of the name is disputed. Muscat is situated in northeast Oman, along the Gulf of Oman & it is flanked by rugged mountains. It has fine harbor, was seized by the Portuguese Afonso de Albuquerque until 1648.

Persian princes held it until 1741, when it became the capital of Oman. Dates, dried fish, mother-of-pearl, and frankincense are exported, although much of Muscat's trade has been taken over by neighboring Matrah, which has better land communications.

Muscat became the capital of Oman in 1793, and the focus of the country’s great seafaring empire of the 18th and 19th centuries. Having been party to the control of much of the coast of East Africa, Muscat’s 20th-century descent into international oblivion, under Sultan Said bin Taimur, was all the more poignant.

Known since the early 1st century CE as an important trading port between the west and the east, Muscat was ruled by various indigenous tribes as well as foreign powers such as the Persians and the Portuguese Empire at various points in its history. A regional military power in the 18th century, Muscat's influence extended as far as East Africa and Zanzibar.

As an important port-town in the Gulf of Oman, Muscat attracted foreign tradesmen and settlers such as the Persians, the Balochs and Gujaratis. Since the ascension of Qaboos bin Said as Sultan of Oman in 1970, Muscat has experienced rapid infrastructural development that has led to the growth of a vibrant economy and a multi-ethnic society.

As in other places on the Arabian Peninsula, oil revenues have been used to develop once-poor towns in Oman. Although lack of space has limited Muscat's growth, post-1970 improvements have included a sumptuous royal palace, restoration of historic structures, and a modern infrastructure. More extensive development has been possible in nearby towns because of the greater availability of land along the coastal strip between the capital and the international airport at Sib.

Thus while Muscat had an estimated population of 55,000 in 2003, the nearby city of Ruwi had 112,000 inhabitants as well as much of the capital region's commercial, government, and residential development. Other towns in this region include Matrah, famous for its traditional souk, or market, Darsayt, Qurum, Mandinat Qabus, Ghubra, and Khuwayr.