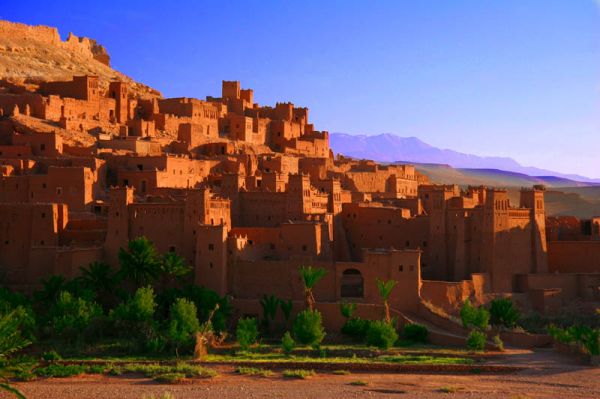 Ouarzazate is in the midst of the desert and is the point of departure for the oasis and the Deep South, that's why the city of Ouarzazate is one of the most fascinating Moroccan travel destinations.

Ouarzazate nicknamed the door of the desert is a city and capital of Ouarzazate Province in the Souss-Massa-Drâa of southern-central Morocco.

The sights are very few and far in between, but the Kasbah Taorirt and Kasbah Tifoultoute on the outskirts of town both deserve a visit.

Kasbah Taourirt is located at the east end of town, a twenty minute walk from the centre. This was built by the Galoui chiefs in the 19th century and reached its height in the 1930s when it was considered the largest Kasbah in Morocco – an enormous construction housing the family of the chief, his servants and followers as well as a community of labourers, builders and craftsmen.

10 kilometres to the north of Ouarzazate stands the Kasbah Tifoultoute, said to be over 300 years old. However, the present structure is largely 20th century, the original property of the Glaoui clan. The Kasbah has been converted to a hotel in the 1960s for the cast of Lawrence of Arabia. It is still a hotel serving adequate food and giving some magnificent views from its terrace. The Kasbah is open for visits for a small fee: you can climb the roof for amazing panoramic views over the countryside and a stork’s nest on the turrets.

Since Lawrence of Arabia was shot in Ait Benhaddou in the 1960’s, Ouarzazate and its region has been a popular filming location for many of Hollywood blockbusters. The magnificent desert and mountain scenery and the plentiful supply of authentic-looking extras have been a favourite directors’ choice.