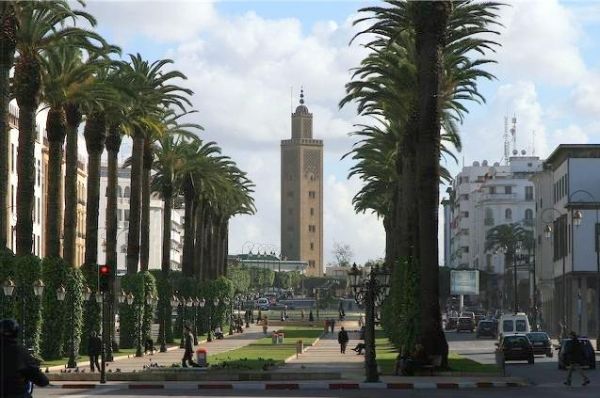 Rabat is one of Morocco's outstanding tourist attractions. It was founded as an Arab army outpost in the 12th century and given the generic name for military encampment, Ribat, which is still in use today.

Rabat is the capital and third largest city of the Kingdom of Morocco with a population of approximately 1 million (2012). It is also the capital of the Rabat-Salé-Zemmour-Zaer region.

Apart from its governmental activities, Rabat is one of the country's main industrial centers where, among other things, textiles, processed food, and building materials are manufactured.

After passing through Bab Oudaia, you will immediately reach an evocative and striking quarter, the Kasbah des Oudaias.
The Kasbah is the original citadel of the Almohad, Merinid and subsequent Andalusian towns in Rabat. It’s rather a small, airy place that is easy to wander about – not the kind you need a guide for.

South of Bab Ouadaia, a third gate will lead you into the Palace Museum and Andalusian Gardens.
The Palace was built in the seventeenth-century by Moulay Ismail, the first Almohad sultan to unify the country. Today, it showcases interesting exhibits of Moroccan art and culture.

A vast central patio gives access to private quarters and reception rooms containing the exhibits. There is a hall containing oriental rugs made in Rabat, an exhibition hall for musical instruments and a salon reserved for customs and rituals.
The Hassan Mosque is the most famous landmark in Rabat and one of the most ambitious of all Almohad buildings.