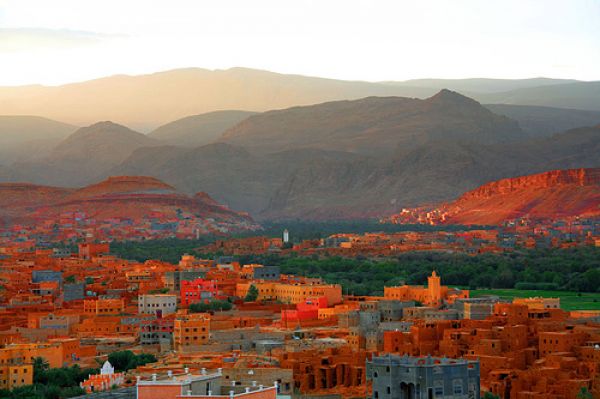 Tinghir is an oasis about 30 Km long & 4 kilometers wide. The name originally referred Tinghir the mountain (IGHIR) which meant the shoulder Tamazight, but it has gradually expanded.

Tinghir is a city in the region of Tinghir, south of the High Atlas and north of the Little Atlas. Located in south-eastern Morocco, is part of the region of Ouarzazate.

The climate is arid subtropical: hot, dry winters in relation to altitude (1,430 m). There are a few rainy days per year, with the greatest precipitation in fall & winter.

The economy of Tinghir is based on agriculture, trade and tourism. In addition, many families live on money sent home by relatives working in Europe. Social and cultural activities are increasing; education projects for young children are increasing in many villages, as well as literacy projects aimed at adults (particularly women). These projects are supported by local and nongovernmental organisations.

The uplift of the Atlas Mountains (primarily during the Neogene) caused the withdrawal of the sea and the deformation of rocks into folds and faults. Wind and river erosion eventually shaped the desert landscape of limestone and clay.

King Mohammed VI gave his approval on 21 January 2009 to make Tinghir an administrative center, an initiative which met the needs of its inhabitants; it provides a legal and institutional framework for reform of territorial administration based on good governance and local self-administration.