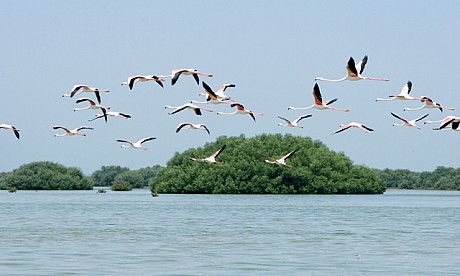 Umm al Quwain is one of the 7 emirates in the UAE, located in the north of the country. Located between Ras Al Khaimah & Ajman along the west coast of UAE. It is the smallest in the UA about 750 square kilometers. It is located along the vital trade route between Asia and India.

Umm Al-Quwain was formed in 1775 when Sheikh Majid Al Mualla established Umm Al Quwain as an independent sheikhdom. Umm Al Quwain is translated as “Mother of Two Powers”, referring to the tradition of seafaring among tribes in the emirate.

Umm Al Quwain Fort: A fort which was once home to the emirate’s ruler and guarded the entrance to the old town, overseeing the sea on one side and the creek on the other. It eventually became a police station then a museum. The museum now houses artifacts found at important nearby sites including Al-Dour and houses a collection of weapons that were used through the emirate's history. It is located near a Masjid (Mosque) in Umm Al Quwain Bazaar.

Old Harbor: An old harbor located in the old town overlooking the traditional dhow building yard where skilled craftsmen continue to assemble these traditional boats. The harbor is surrounded by old coral stone houses that display features of the original architecture and intricate sculptured plaster work.

Islands of Umm Al Quwain: Islands that lie to the east of the mainland peninsula on a unique stretch of coastline consisting of sandy islands surrounded by dense mangrove forests, separated by a series of creeks.
The largest of the seven islands is Al Sinniyah, followed by Jazirat Al Ghallah and Al Keabe, all of which are visible from the old town. Tucked in between these and the coastal plains are the smaller islands of Al Sow, Al Qaram, Al Humaidi, Al Chewria and Al Harmala.

Al-Dour: Located roughly where the town of Umm Al Quwain is now, it is considered the largest pre-Islamic site on the Persian Gulf coast.Al-Dour was an important trading port from about 200 BC to 200 AD.
Thousands of graves are found among the houses of Al-Dour. In some cases the larger tombs contained the remains of more than one individual, perhaps a family.

Dreamland Aqua Park: the largest water park in the UAE is located on the coastline of Umm Al Quwain; about 40 minutes drive from Dubai, with 250,000 square meters expanse of landscaped gardens and over 30 rides, slides, and attractions. The Park is operated all year round with a daily capacity of ten thousand visitors.