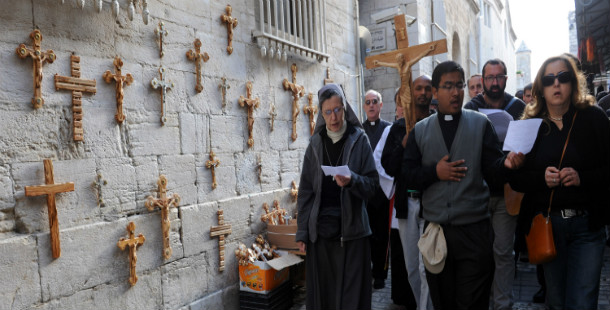 The Via Dolorosa (Way of Suffering) is a historical street in the Old Jerusalem city. It is the road where Jesus walked from the place of Pontius Pilate’s sentencing to Golgotha. It is also the street where Jesus Christ passed through at the time of His crucifixion.

The route takes us along narrow paths, monasteries, underground sites, wonderful panoramas of the entire Old City and the Mount of Olives, all easily done on foot passing through the shops and markets of the Old City.

Walking the real street in Old Jerusalem that bears the name “Via Dolorosa” means putting aside these images, but hopefully replacing them with other, even more meaningful ones that will bring you closer to moments you will always hold precious. For as long as Christians have been coming to the Holy City, they have walked the last path of Jesus. At least for the last 1,000 years, it is the same path visitors walk today.

As time went on, the sacred stories became sacred landmarks – the Stations of the Cross. Here are fourteen stations. The first is the Praetorium, where Pilate condemned Jesus and Jesus took up the cross. A convent now stands over a small part of this huge fortress. In its basement are ancient flagstones, by tradition known as the Gabata, or stone pavement.

Beneath the pavement is a gigantic water cistern built by Herod the Great, which might have quenched the thirst of the Roman soldiers who taunted Jesus. When the Jerusalem Municipality found ancient stones during maintenance work some years ago, they repaved the present Via Dolorosa with them - the better to show the sacred sites to Christian visitors.

Past the Praetorium is station three, where Jesus fell with the cross; tradition says this event recurred, and it is marked by stations two more times. The fourth station is where Simon took up the cross. Each station and its story: Jesus meets Mary, a noble woman of Jerusalem wipes the sweat from Jesus’ brow; Jesus speaks to the women of Jerusalem, and onward to the last stations the crucifixion and burial, located within the ancient Church of the Holy Sepulcher.