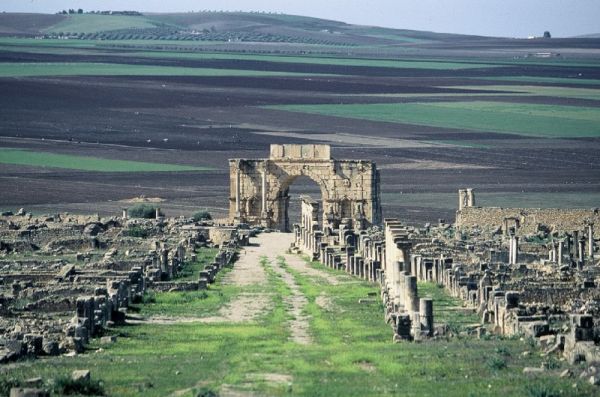 Volubilis is the site of the largest and best-preserved Roman ruins in Morocco. Dating from the 2nd and 3rd centuries AD, excavations have revealed that the site was originally settled by Carthaginian traders even earlier.

Volubilis is a partly excavated Roman city in Morocco situated near Meknes between Fes and Rabat. The ruins remained substantially intact until they were devastated by an earthquake in the mid-18th century and by Moroccan rulers subsequently looting the site for stone to reuse in building Meknes.

This city was once a Mauritian capital which later on became Roman. Even though Volubilis was continuously inhabited for several centuries and in spite of its important role of a capital city it was abandoned in the 11th century when the seat of the government was moved to near Fes.

For the following eight centuries, the city was left almost unspoiled by the time but in the 18th century a strong earthquake ruined much of the site. Some of the stones from Volubilis were used in the renovation of Meknes. Almost 100 years passed until they realized that the ruins were in fact the ancient Roman town.

Most of the original Pre-roman City wall was built over or destroyed, but a 77 meters (250 ft) stretch of the original wall, which was made of mud bricks on a stone foundation, can still be seen near the tumulus.

The Roman city walls stretch for 2.6 kilometers (1.6 mi) and average 1.6 meters (5.2 ft) thick. Built of rubble masonry and ashlar, they are mostly still extant.  The full circuit of walls had 34 towers, spaced at intervals of one about every 50 meters (160 ft), and six main gates which were flanked by towers.

The houses found at Volubilis range from richly decorated mansions to simple two-room mud-brick structures used by the city's poorer inhabitants. The House of the Athlete or Desultor, located near the forum, contains a humorous mosaic of an athlete or acrobat riding a donkey back to front while holding a cup in his outstretched hand. It may possibly represent Silenus.

The House of the Ephebe was named after a bronze statue found there and has an interior courtyard off which are a number of public rooms decorated with mosaics, including a depiction of Bacchus in a chariot being drawn by leopards.