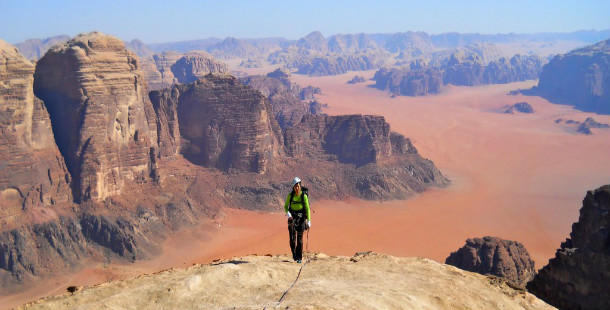 Wadi Rum also known (Valley of the Moon), it is very spectacular desert resort that situated in south of Jordan, 70 km to north of Aqaba. It is the largest wadi in Jordan & among the main tourist attractions being the most stunning landscape in the world.

The name Rum most likely comes from an Aramaic root meaning 'high' or 'elevated' To reflect its proper Arabic pronunciation, archaeologists transcribe it as Wadi Ramm.

Huge mountains of sandstone and granite emerge, sheer-sided, from wide sandy valleys to reach heights of 1700 meters and more. Uniquely shaped massive mountains rise vertically out of the pink desert sand, which separate one dark mass from another in magnificent desert scenery of strange breathtaking beauty, with towering cliffs of weathered stone.

Narrow canyons and fissures cut deep into the mountains and many conceal ancient rock drawings etched by the peoples of the desert over millennia. This area of Jordan is quite isolated and largely inhospitable to settled life. The highest elevation in Wadi Rum is Mount Um Dami at 1,840 m (6,040 ft) high and was first located by Difallah Ateeg, a Zalabia Bedouin from Rum.

The highest elevation in Wadi Rum is Mount Um Dami at 1,840 m (6,040 ft) high and was first located by Difallah Ateeg, a Zalabia Bedouin from Rum. Bedouin tribes still live among the mountains of Rum and their large goat-hair tents are a special feature of the landscape.

Wadi Rum is probably best known because of its connection with the enigmatic British officer T.E. Lawrence, who was based here during the Great Arab Revolt of 1917-18, and as the setting for the film that carried his name "Lawrence of Arabia". The valley floors are some 900-1000 meters above sea level, and the great sandstone crags raise sheer, a further 500-550 meters.

Jabal Rum is the highest peak in the area and the 2nd highest in Jordan. Others are some 27 km north of the Rum village like Jabal Kharaz and Jabal Burdah with its Rock Bridge which is one of Wadi Rum's most popular attractions. Serious trekkers will be drawn to Wadi Rum, with challenging climbs some 1750 m high, while casual hikers can enjoy an easy course through the colorful hills and canyons.

Wadi Rum is an ideal location for hiking, climbing and trekking. Except in summer months, climbing the Rock Bridge here is unforgettable. If you were lucky enough, you may get the chance to visit some local Bedouin tribes by using the four –wheel vehicles, riding on camels or maybe just walking plus other tourists' activities.

Hikers can enjoy the tranquility of the boundless empty spaces and explore the canyons and water holes to discover 4000-year-old rock drawings and the many other spectacular treasures this vast wilderness holds in store.