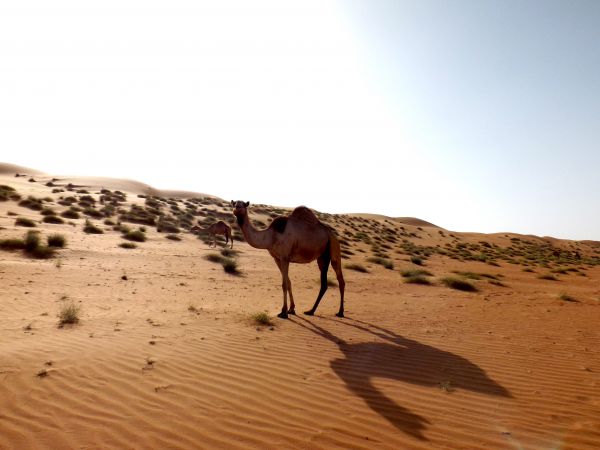 The Wahiba Sands is a large desert area just four hours drive from Muscat. A surprisingly wide array of flora and fauna, the most impressive dunes can be found in the north east, some reaching an enormous 300 feet high.

It’s only a couple of hours drive from Muscat, Oman, and thus popular with tourists.

Wahiba Sands (also called the Sharqiya Sands) is a small but prototypical desert  about 100 miles long and 50 miles wide and filled almost entirely with row after row of sand dunes.

The region is named for the Wahiba tribe. The desert has been of scientific interest that  documented the diversity of the terrain, the flora and fauna, noting 16,000 invertebrates as well as 200 species of other wildlife, including avifauna. They also documented 150 species of native flora.

The Wahiba Sands stretch to the Arabian Sea so, contrary to any assumptions about the desert, there’s a rich wildlife here, including gazelle, mongoose and the large migrant bird populations that flock to the mudflats and lagoons around Barr Al Hikman in winter.

There are also camps to spend the night in the desert, a remarkable experience that starts with a golden sunset, continues with a densely-starred sky and concludes with the soft light of a desert dawn. The area is occupied by Bedouins who congregate at Al Huyawah, an oasis near the border of the desert, between June and September to gather dates.