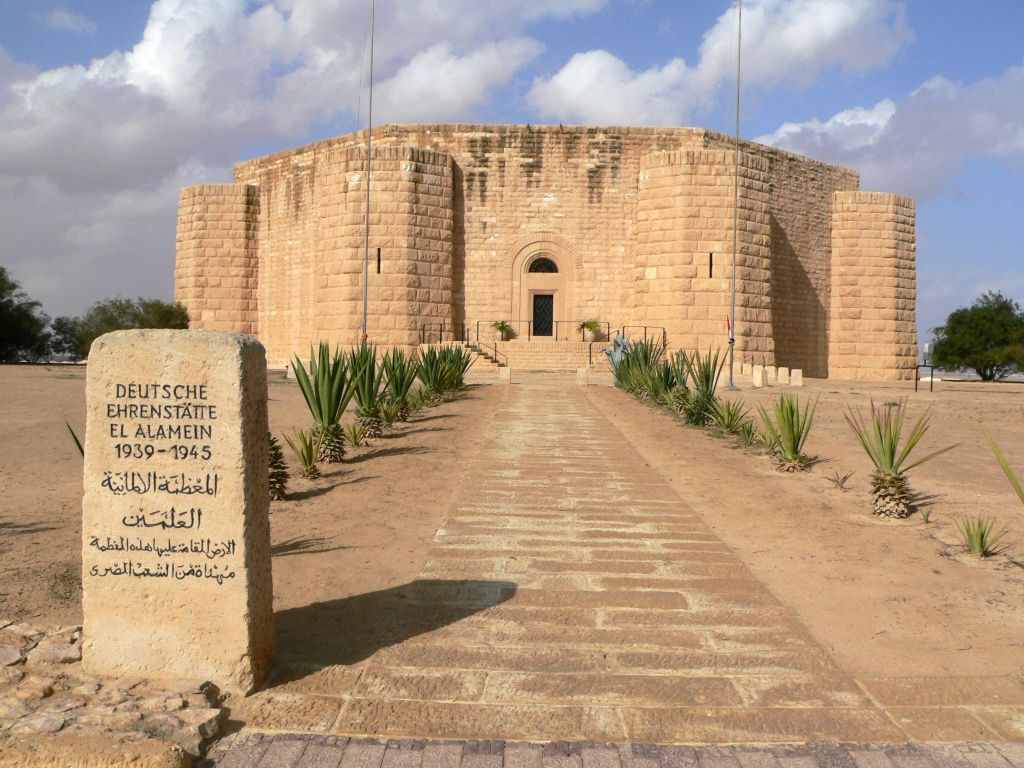 Approximately 130 Km west of Alexandria on the main coast road to Mersa Matruh. El Alamein has a hot desert climate , in common with most of the Middle East & North Africa. Al Alemein War Museum is one of the best museums in Egypt.

The War Museum in El-Alamein sheds the light on the four main countries – Great Britain, Germany, Italy and Egypt – that were involved in the WWII battle of El-Alamein and its circumstances.

In 1942, the Germans, led by Rommel, and the Allies, led by Montgomery, fought one of the most decisive battles of World War II : The Battle of Alamein, a tiny town about 120 Kms West of Alexandria. The victory, which went to the allies, saved Egypt for the Allies and led to the defeat (1943) of the Axis powers in North Africa.

A visitor can view this heavy equipment from World War II, go inside a tank or an army car, or even jump up and sit atop a tank. The garden has about fifteen large pieces used by different forces in the Battle of Al-Alemein. . The museum also has a mixed hall that contains items from the war generally.

The Egyptian hall shows how Egypt helped the allies during the war. Another attraction of The Alamein is The Alamein Cemetery. The Alamein Cremation Memorial commemorates more than 600 men whose remains were cremated in Egypt and Libya during the war, in accordance with their faith.

However, like the rest of the northern coast of Egypt, its climate is slightly less hot, compared to the rest of Egypt. The cemetery lies off the road, slightly beyond a ridge, and is indicated by road direction signs approximately 25 meters before the low metal gates and stone wing walls which are situated centrally at the road edge at the head of the access path into the cemetery.

The Cross of Sacrifice feature may be seen from the road. The battlefield, across which the fighting surged back and forth between 1940 and 1942, was the 1,000 kilometers of desert between Alexandria in Egypt and Benghazi in Libya. It’s a haunting place where more than 7000 tombstones sit on a slope commanding a sweeping view of the desert.