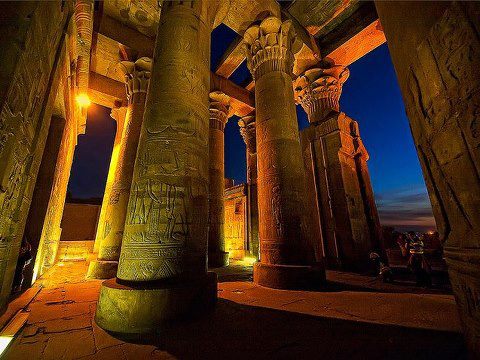 Dendera temple complex of is considered one of the best preserved temple complexes in Egypt. Located 2.5 km south east of Dendera (Tantere) the sixth Nome of Upper Egypt, known to the Greeks as Tentyris and it was a town of some importance.

Today, we know it as Dendera, though the population of the town has, since antiquity, moved to Qena across the Nile on the east bank. Now, the ancient temple lies isolated on the desert edge.

The Temple of Hathor at Dendera, on the Nile north of Luxor, is one of the latest Egyptian temples. Dedicated to the wife of the god Horus, it was built in Roman times and its decorations include Roman emperors alongside Egyptian gods.

Along with Abydos further north, Dendera is a popular day trip from Luxor. There are many reliefs of figures and rituals on the exterior of the temple, including pharaohs, Egyptian deities, and Roman emperors.

The most fascinating sight is the roof chapel dedicated to Osiris, which contains a sundial and circular zodiac. The zodiac, a replica of the original that is now in the Louvre, consists of two superimposed constellations.

One is centered on the geographical North Pole, the other on the true North Pole.  An axis passes through Pisces, confirming what we know from archaeological evidence: it was built in the age of Pisces, just over 2,000 years ago.

Interestingly, two hieroglyphs on the edge of the zodiac seem to indicate that another axis passed through the beginning of the age of Taurus (about 4,000 BC; a thousand years before dynastic Egypt).

This may be a clue to the great age of the first temple that stood here. Among the many other structures here are the remains of a 5th-century Christian basilica, an excellent example of early Coptic Church architecture.

There is also a sanatorium, where pilgrims could bathe in the sacred waters or take holy water - which had been run over magical texts to infuse it with power - home with them.