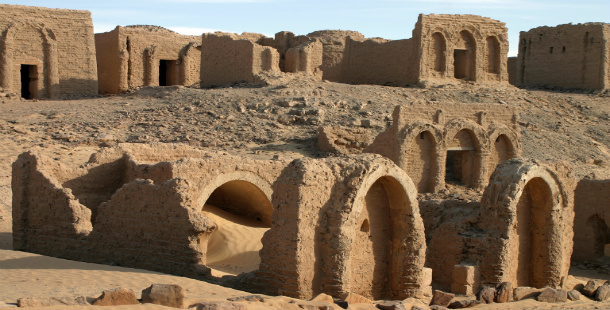 Dakhla Oasis, one of Egypt’s mot remote oases, it is a splendid gateway for a vacation of unlimited relaxation. Dakhla is surrounded by a wall of colorful rock formations and fertile cultivated areas scattered between sand dunes within the area, offering natural magnificent scenery.

In ancient times Dakhla was known as Zeszes, the ‘Place of the Two Swords’, because it is divided into two distinct areas andIt has also been called el-Wah, the ‘Inner Oasis’ .

The Dakhla Oasis lies to the northwest of Kharga and is also about 310 km to the southeast of Farafra. Dakhla is the farthest oasis out of Cairo and is considered one of Egypt's most beautiful oases. The first contacts between the pharaonic power and the oases started around 2550 BCE.

The fortified Islamic town of Al Qasr was built at Dakhla Oasis in the 12th century probably on the remains of a Roman era settlement by the Ayyubid kings of Egypt. Dakhla has retained most of its culture and charm even though it has increased in size by about double and government funding and technical training has revitalized the economy.

Dakhla is the only place in Egypt where new water wheels which are driven by buffaloes are constructed. They are made of palm timber and clay jars and are called saqiyas. The oasis is connected to Kharga by a 120 mile (200 km) road that has buses running daily.

The oasis of Dakhla contains two small towns, Mut and Al-Qasr. Mut is the larger, with most of the hotels and Al Qasr is the Oasis’s second main city. Dakhla is also the home to many ancient remains including the amazing Deir El Haggar  and the memorable Muzawaka Tombs .

If exploration is what you seek, then you can’t miss visiting Dakhla’s numerous thrilling villages  that are waiting to be discovered. Dakhla is also abundant with charming natural springs, one of which is Ain Al Qasr springs , In addition to several lakes, and fish ponds .