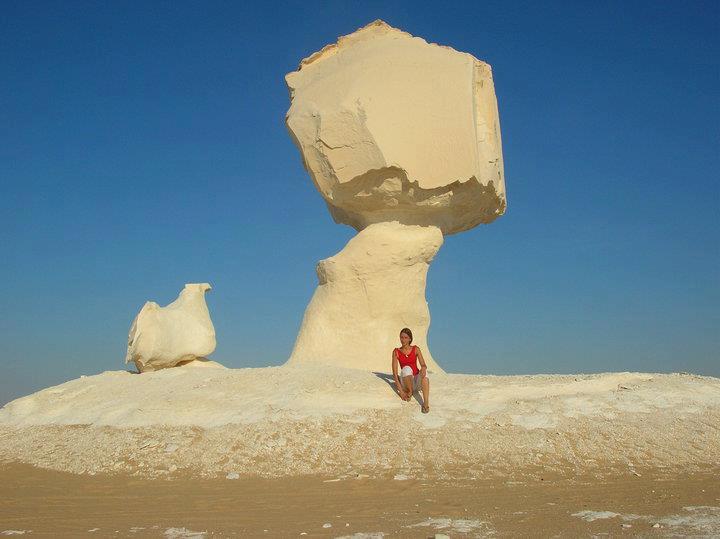 Egypt Western Desert is 262, 000 square miles of dunes, canyons, oases, mountainous plateaus, and valleys that span most of land west of the Nile Valley. The small oasis of Al Farafra is the second biggest depression by size in Egypt West Desert and the smallest by population.

Farafra is known as Ta-iht or the Land of the Cow in Pharaonic time and it was best described as the city of conquest or invasion because of its remoteness.

It takes a triangular-shaped fertile, roughly mid-way between Dakhla and Bahariya, with the impenetrable Great Sand Sea bordering the region to the west. Parts of the town have complete quarters of traditional architecture, simple, smooth, unadorned, all in mud color.

The Romans left some monuments in the Farafra like the Qaser Al Farafra, or the Farafra Palace and Qaser Abu Monqar and some other rock cut tombs. There are also the ruins of a Roman Temple when a fortress was built to guard this section of the ancient caravan routes to the other oases and to the Nile Valley.

There is also an ancient cemetery near Qasr el-Farafra, where a few undecorated rock-cut tombs are almost completely buried by sand. Travelers coming from Bahariya will cross through the Black Desert, passing the tiny Oasis of El-Hayiz on the way. Nearby there are some Roman ruins, including a church with Coptic graffiti.

The Arab rulers of Egypt maintained a relatively large army in the desert. The family of Mohamed Ali gave some attention to the oasis and the Farafra. The Farafra is also being developed for tourism, and while there are few ancient artifacts in the region, the desert is wonderfully diverse.

There is also a huge lake and a well with the name of Abu Nus located 15 kilometers to the north of the Farafra oasis. The White Desert is a huge chalk and limestone landscape in Al- Farafra Depression and one of the most astounding natural wonders of Egypt. This area has also become a major touristic attraction as well.

Many tourists choose Farafra today as it started being famous worldwide for its quietness and warm weather. People from the United States and from Europe come to the Oasis to escape the cold weather in their homeland. They also visit the Farafra to enjoy the wonders of the Western Desert.