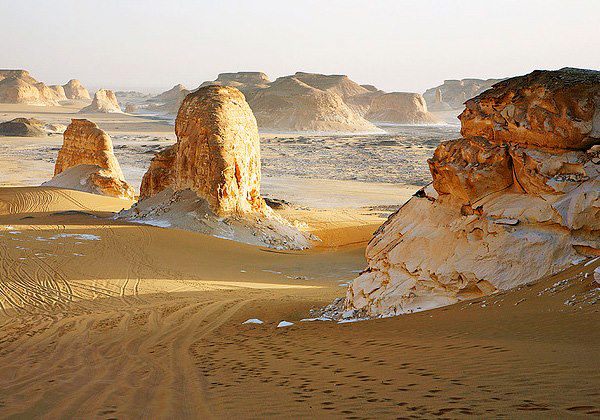 The most accessible of the Western Desert Oases, Bahariya offers many interesting attractions and a foretaste of how life goes in an oasis. Bahariya Oasis has a particular historical significance as it was a transit point for the Caravan tracks and Nile Valley.

In and around Bahariya Oasis Egypt Western Desert

The name Bahareya was most possibly derived from the word Bahr, which means the sea in the Arabic language.

The most prosperous period in the ancient history of the Bahareya Oasis was during the reign of the 26th Dynasty Particularly during the rule of Amasi. It is the type of place that creates wonder in adults, where such feelings were long ago thought lost.

It is a land not yet fully explored, with twists and turns that reveal ever changing landscapes. The Oasis is home to amazing ruins, such as the Temple of Alexander the Great, beautifully painted Ptolemaic tombs and very old churches.

The recent discovery of the golden mummies, the pride of Bawiti Museum today, turned the oasis’ main town, into a tourist magnet, and its proximity to the Black Desert have earned Bahariya a high rank on the tourist map of Egypt.

There are some mosques in Bahariya. The oasis is home to more than 10 different hot springs spread across Bawiti, Al-Qasr and Mandisha. The valley of the golden mummies in the Bahareya Oasis is one of the most unique necropolises all around Egypt.

The Ethnographic Museum of Al Bahareya which was built in 2005 is located in the center of the city and it was established by Mohamed Eid, one of the oasis's local artists. This museum hosts the terra-cotta sculptures and paintings of Mohamed Eid. There are also some objects representing the different life aspects in the Bahareya Oasis.