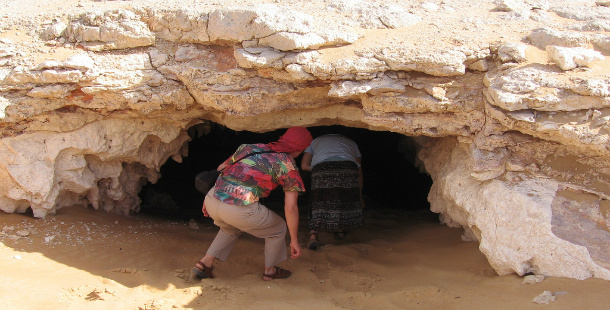 30m wide, 8m high contains animal engravings date back to Neolithic Period. Located at the middle of Western Desert next to old camel track connecting Farafra & Assiut. Uncover Djara Cave facts, when was the Djara cave first discovered and who discovered it?.

Djara Cave "Gara Cave" is one of the very few well decorated caves in Egypt. It has the natural result of pure water in contact with the dry desert climate, over millions of years of formation. The cave is easy to visit; many parts have a level floor, covered by the sand of the desert.

It is close to the crossroads of the Darb Assiut, the caravan trail connecting Farafra Oasis and Assiut, and the Abu Muharraq sand dune, at approximately 1.500kms the longest dune in the Western Desert.

It is 180kms from both Bahariya and Farafra. The Djara region, an area with a size of almost 5 by 10km, was inhabited during this time. It was wetter, so life was possible, but there was not enough rain for the growth of flowstone.

In earlier wet phases the amount of rain was much higher, and the spelethems were formed during this period. They are dated by the 18O method to be mostly of marine isotope stage 5 ages.

This cave was rediscovered twice. 1873 by German adventurer Gerard Rohlfs After the climate changed, and the people had left the area, the cave was forgotten for millennia. It was rediscovered 1989 by the desert explorer Carlo Bergmann during his famous expedition.