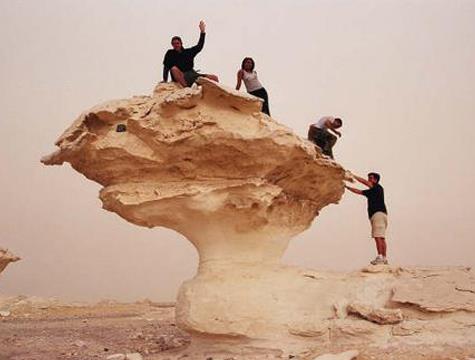 Most of the desert tours visiting Egypt's Western Desert include a stop at Kharga. It is the capital of the governorate of the new valley, or Al Wadi Al Gadeed. It connected Egypt to Southern Africa through the forty days road.

The Kharga Oasis must be one of the most beautiful places in the world, especially at sunset. This oasis which was known as the 'Southern Oasis' to the Ancient Egyptians. It is located 360 miles far from Cairo and 142 miles far from Luxor.

There is no international airport at El Kharga Oasis; so it is impossible to organize private helicopter or balloon flights so researchers use the kites and remotely operated cameras  to help map one of Egypt's richest, least-studied archaeological troves.

Kharga is also the name of the bustling main city of the oasis whose inhabitants now number sixty thousand, including one thousand Nubians who were settled here after the creation of Lake Nasser. Although framed by the oasis, there is no oasis feeling to it; unlike all other oases in this part of Egypt.

It contains the least population density in the whole nation with around 20,000 inhabitants nowadays and a population density of 4 persons in each square kilometer. The monuments and ancient sites of the Kharga Oasis: The Temple of Hibis, this temple is considered of significant importance as it represents different stages of the Egyptian history.

The Cemetery of Bagawat, the most important tombs of the cemetery is the tomb of Exodus which represents the Israelis going out of Egypt and the tomb of "peace' that contains reliefs of Jacob.

The Temple Of Ghweita, it was dedicated to the Theben triad Amon, Mut and Khonsu. According to some guide books, it is in a very ruinous state. The Temple of Qaser Al Zayyan, the temple of Qaser Al Zayyan was dedicated to the cult of Amun Ra of Hibis. There are also many historical accounts of expeditions sent to quell the rebellious inhabitants of the oasis.