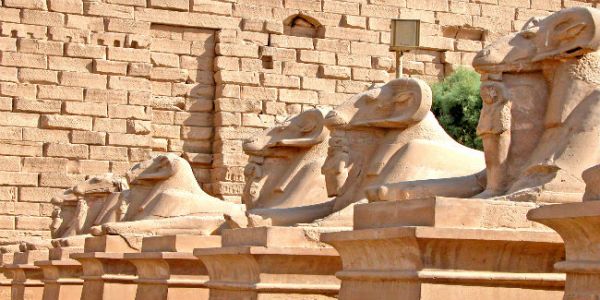 The Egyptian empire, during the second intermediate phase, in the reign of the 15th dynasty, witnessed a great decline in terms of unity and power. At the same period of time, many people, due to the harsh climate conditions in Al Sham in Syria and Palestine, started to emigrate to Egypt and resided in the Egyptian Delta. These people were called the Hyksos.

At the end of the 18th century BC, the Hyksos were able to form their kingdom in the Eastern section of the Egyptian Delta. Their population at the time was estimated to be around half a million people who lived in and around Zawan, the Hyksos capital. With time passing by, the Hyksos started taking control of Lower Egypt and the areas around the Delta. However, Upper Egypt including Thebes and the Nubia used to pay the Hyksos an annual tribute for more than one century and a half.

This period of the Hyksos occupation of Egypt is featured with a great deal of injustice to the Egyptians. This is in addition to a large number of thrifts and destruction. The Egyptians bore this harsh period until the time has come when they expelled the Hyksos out of Egypt.

This processes began during the ruling period of King Seqenenre Tao in 1580, Thebes became stronger and powerful. This made a war between the Egyptians of Thebes and the Hyksos who resided in their capital Zawan, located in the Egyptian Delta, just a matter of time. In fact, the battles began in 1575. However, Seqenenre Tao was killed in one of the battles with the Hyksos.

The new king of Egypt, Kamose, the last king of the 17th dynasty, ruled over Egypt only for 5 years. However, in this short period, he was able to defeat the Hyksos until he reached their capital in the Delta. Kamose also took control of many other regions in Egypt including Al Bahariya Oasis and the Nubia. After his death, his brother, Ahmose, became the king of Egypt.

Ahmose was in fact only 10 years old when he became the ruler of Egypt. Ahmose’s mother encouraged and motivated him to train on fighting. When he was 19 years old, his men were able to find a letter written from the King of the Hyksos to the rulers of Nubia to begin moving towards Thebes and attack it. This motivated Ahmose to begin a huge military campaign against the Hyksos.

Ahmose even began invading the original lands of the Hyksos in the area to the East of Egypt. Moreover, he was able to defeat the Nubians in various battles in order to punish their prince who was cooperating with the Hyksos’s King. This military campaign marks the end of the second intermediate periods and the beginning of the establishment of the NewKingdom of the ancient Egyptian history.