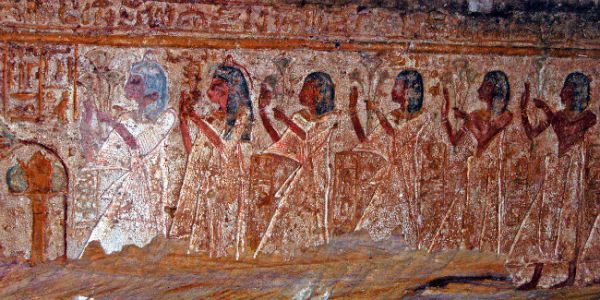 Ancient Egyptians gave special care to roses and flowers, they give it to each another in various occasions. Explore facts about Egypt Flowers, Ancient Egyptian Flowers Culture. Read More About Flowers in Ancient; Used, Grown and Flowers Worshiped in Ancient Egypt.

Roses were wrapped around lotus sticks and presented to the loved ones. In various occasions, like during the Easter, the man used to give his wife roses at the beginning of the festivals.

The ancient Egyptians cultivated various roses and flowers in their gardens and even in smaller places at home. They even used to offer their guests different wonderful flowers. They used to present as part of the offerings to god and on the tombs of their loved ones. Even the ancient Egyptian mummies used to be surrounded with flower wreaths.

The types of plants and flowers grown in ancient Egypt included Cornflowers, Daisies, Water Lily, Jasmine, Myrtle, Roses, Mandrakes, Lynchpins, Ivy, Celosia, Narcissus, Mignonettes, Poppies, Lotus, Papyrus, Amber, Pomegranate and Blackberry. These flowers can be witnessed in the tombs dating back to the reign of the New Kingdom, from 1580 till 1085 BC.

Historical records also noted the Priest, Meri Ra, who lived during the ruling period of King Akhenaton, from 1379 till 1362 had a huge garden with many trees and flowers. He also had some cotton plants. However, the Egyptians used cotton for decorations as they preferred flax for their clothes.

Moreover, King Ramses III established a group of large gardens in ancient Thebes in the second half of the 12th century BC with many lotus, Jasmin, and papyrus flowers and trees.

Each temple in ancient Egypt used to have a sacred garden with holy trees and flowers. The priests used to plant flowers in pots made out of pottery. The Pharaohs were the first to position seedlings in pots to take care of them.

The ancient Egyptian women as well gave special attention to various roses and flowers. They used to position Lotus flowers on their foreheads. They also used to present flowers as gifts to their neighbors. Flowers also had some geographical symbols. The Lotus was the symbol of Upper Egypt, while the papyrus was the symbol of Lower Egypt.

The religious festivals of ancient Egypt were full of flowers and roses. They even produced tiles with flowers’ shapes like blue and white lotus, amber, and poppies. These tiles began their productions during the ruling period of the New Kingdom from 1580 till 1085. This is apparent from the collections and the belongings like those of Tut Ankh Amun as the king and his wife were represented in many occasions enjoying flowers.