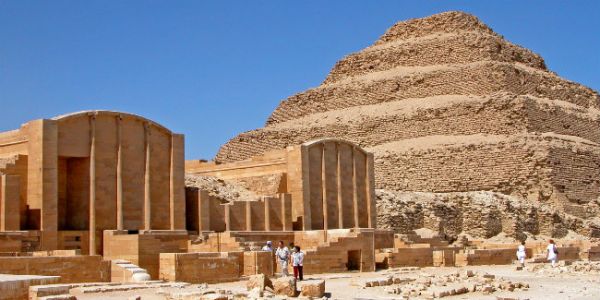 When Menes unified Egypt under his leadership more than 5000 years ago, he established the very first capital of unified Egypt. This was Memphis that is located near the Giza Pyramids today.

Menes also founded the first dynasty of the Old Kingdom of ancient Egypt. In fact, the seat of the power of the Old Kingdom was in Memphis. The location of Memphis was quite strategic. It was situated at the edge of the beginning of the Egyptian Nile Delta. It was featured with being near Upper Egypt as well.

At the early period of the Old Kingdom of ancient Egypt, the kings chose Abydos as their burial and funeral site. This was to reflect their Southern loyalty and origins. Afterwards, the kings started burring their beloved ones in Saqqara, one of the richest archeological sites in Egypt today. At this period of the Egyptian history, the kind was the incarnation of godHorus and he was buried near his divine power.

The kings of the Old Kingdom managed to preserve the sovereignty of Egypt and protect the country against any outer invasions. They established a large country with 42 provinces. These districts were managed following one of the most ancient forms of bureaucracy.

Taxations resulted in a great wealth and treasures. The organized governmental system of ancient Egypt during the Old Kingdom made it possible to have great massive structures like the pyramids. This is why the rulers of the Old Kingdom were called the Pyramids’ builders. The most famous pyramids builders included Djoser, Senfru, Cheops, and Khafre. Moreover, these great national projects contributed to the unification of the whole nation towards achieving an objective.

Senfru, the father of Cheops, the builder of the Grand Pyramid in Giza, had three great pyramids built. There is his red pyramid in Dahshur, which is the second largest in Egypt. He also constructed the famous bent pyramid in Dahshur as well.

With the huge amount of resources needed to build the pyramids and with some poor harvest seasons, all of these reasons resulted in a relative decline in the royal power. This was reflected on the smaller rather weaker pyramids constructed in the coming periods of time. The long ruling period of Kind Pepi I, from 2278 till 2184 made it even worse for the whole nation.

After a long period of wealth, great architectural achievements including the Giza Pyramids, the Old Kingdom of ancient Egypt witnessed a decline that led to the first intermediate period of the Pharaonic ear. During this period, the central power of the king and the royal family was altered. Local rulers began gaining more control over large areas of lands.

Kings of the Old Kingdom

Beyond Old Kingdom of Egypt