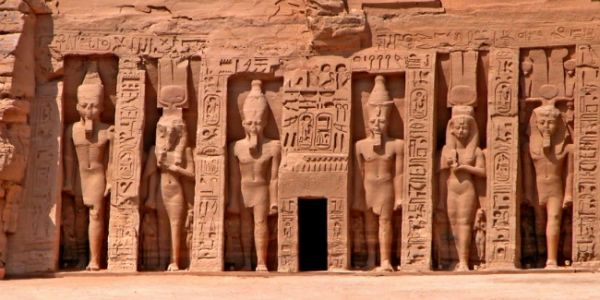 When Kamose and Ahmose defeated the Hyksos and regained the unification of Egypt once again, the New Kingdom era began. This is considered by many as the golden age of ancient Egypt.

After getting rid of the Hyksos, the kings of the New Kingdom began consecutive military campaigns in the North and the South. In the North the Egyptian armies reached as far as the Euphrates River. While in the South, the Egyptian forces were able to control all over Nubia.

All the revenues of these successful military campaigns were used to construct breathtaking establishments in Thebes and all around it. A great example is the huge Temple of Karnak, the cult of the worship of the god Amun. Several successive Pharaohs had their own contributions added to this great complex of temples.

Ahmose, the founder of the New Kingdom of ancient Egypt, as many historian’s assert, was a great warrior. His son, Amenhotep I followed the steps of his father and took control of massive lands in Nubia.

Afterwards, began the succession of what scholars named the Tuthmosis kings. These were sons born to minor wives of the kings but managed to reach the throne.

When Tuthmosis II passed away, his wife, Queen Hatshepsut became the first queen to rule over Egypt. She was even portrayed in many occasions as a Pharaoh with beards. The successor of Hatshepsut was Tuthmosis III, who was famous all over history by his nickname; Napoleon of the Pharaohs.

Tuthmosis III was one of the most successful warriors and army leaders in ancient Egypt. He was able to conquer Asia minor and regain the Egyptian power over the area over the Euphrates River.

All these military achievements resulted in more civilization and wealth. This was reflected in marvelous buildings. There are for example the Temple of Abu Simble, the Temple of Luxor, and many other magnificent structures that remained until today as evidences of the greatness of the rulers of the New Kingdom of ancient Egypt.

Becouse of the increasing power of the priests of Amun who dominated Thebes and divided the country between their rule and the pharaoh's. The New Kingdom in Ancient Egypt for that absene of the central government entered the the Third Intermediate Period with a steady decline in power that caused the Persian invasion of Egypt in 525 BCE.

Kings of the New Kingdom