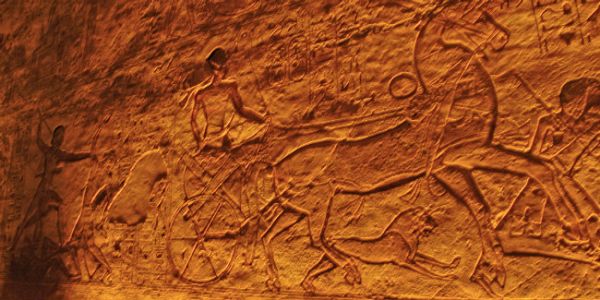 The two parties fighting were the Egyptian army led by Ramses II, the most renowned builder of ancient Egypt and the Hittites. The battle took place in the city of Kadesh that was located near the Orontes River in Syria.

The Egyptian authority over Asia minor witnessed a recess at the end of the ruling period of the 18th dynasty. With many domestic disturbances that followed the religious revolution led by Ikhnaton, the Hittites took advantage of that and took control of several Egyptian territories in Asia Minor.

When Akhenaton passed away, Hor Moheb, the army leader at the time became the king of Egypt. He was able to restore the local stature, but he wasn’t capable of regaining the lands occupied by the Hittites. Ramses I took control after him establishing the 19th dynasty.

Many Pharaohs from the 19th dynasty carried out military campaigns against the Hittite forces with some remarkable results. However, Pharoah Ramses II, during the fifth year of his reign, led his army in a harsh war against the Hittites. Both parties faced each other’s in Kadesh.

After severe battles between the two armies, Ramses II was not able to defeat the Hittites and they were not capable of achieving any progress as well. Historical records, nevertheless including the wall inscriptions in various ancient Egyptian temples like the Karnak, Ramssium, and Abu Simble noted that Ramses had a great victory over the Hittites in Kadesh.

On the other hand, King Muwatalli II, the king of the Hittite army at the time asserted, through his records, that he had a great victory over the Egyptians. In fact, after the battle of Kadesh, Ramses went on regaining control over large parts of Asia. At this point in time, the Assyrians’ powers began increasing and started threating both the Egyptian and the Hittite empire.

This led to the signing of the first peace treaty in the history of mankind between the Pharaohs and the Hittites. This was in 1258 between Ramses and the King of the Hittites to respect the sovereignty of each other’s. The treaty was carved both in the hieroglyphic language.

It was written on a board made out of silver. However, unfortunately, it was lost throughout time. Nevertheless, it is still considered the first peace treaty to be recorded in human history.

Beyond Battle of Kadesh