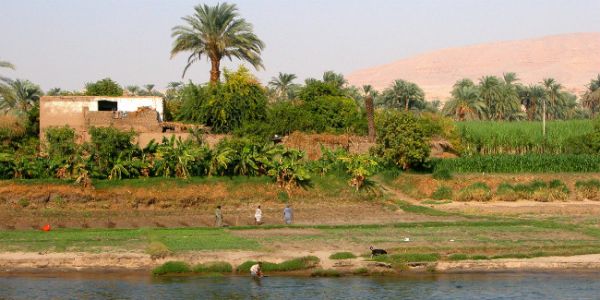 The Pharaonic civilization is among the most ancient and impressive in the world. There are many lessons that we can benefit from learning about their lives and style of living. Housing has always been among the most important needs of humans. The same applies to the ancient Egyptians.

During the Stone Ages, before the establishment of the ancient Egyptian dynasties, Egyptians used to live in small rather primate huts. These were afterwards transformed into small cabins with a little number of rooms. The houses were mainly made out of simple bricks.

Of course, the houses varied largely according to the social classes of the ancient Egyptians. The house of the poor, in fact, never changed a lot from the past till today. It mainly consisted of one or two chambers where every member of the family lives. They were also mainly made out of mudbricks.

Unfortunately, historians were not able to gather a lot of information about Egypt houses during the period of the Old Kingdom. However, some drawings in ancient Egyptians tombs and temples assert the continuation of the usage of mud bricks. This is besides the fact, of course, that the homes of the rich people were wider and more luxurious.

The 10th dynasty witnessed a landmark in houses’ construction in Egypt. This was the first time houses were built of two floors instead of only the ground floor. The second floor was mainly used as a storage area. The main room was constructed in the ground floor and it was accessed after passing through a long corridor for the privacy of the residences of the house.

Afterwards, an open courtyard was created before the corridor leading to the heart of the house. Many chambers and sections were surrounding this courtyard like storages, workshops, and everything else that would be of benefit for the household.

Generally speaking, during the Middle Kingdom and until the beginning of the New Kingdom, there were two types of houses. The house of the poorer including workers and peasants. These houses would consist of from 3 to 5 rooms with no decorations whatsoever. The houses of the governmental officials and nobles would include up to 70 rooms, halls, and chambers.

The brilliance of the ancient Egyptian architects is apparent in the hiding of the section of the owner of the house, his women, and children from the rest of the house.

The houses built in the New Kingdom were large and wide. They seemed as if they are small villas or palaces "guest rooms" with a completely separate section for the owner of the house away from the public affairs or where the guests would be staying. This in addition to many grains’ storage places, a large kitchen, and many other sections according to the desire of the owners.

The palaces of the nobles and royal family members during the reign of the New Kingdom consisted of large halls with stone pillars, wide balconies, large chambers with some decorations and ornaments depending on the stature of the owner of the house.

The houses of the commons at the time were quite similar to one another. A short corridor would be leasing to the welcoming chamber that was less than 1 meter in diameters. There would be two or three rooms afterwards. There is also the main living area of the inhabitants of the house.

At the end of the New Kingdom, architects stopped designing special sections of the house for the women. This meant that the owner of the house and his wife shared the same room. This is in addition to another room for the sons and daughters. This is of course for economic reasons to save resources.

Religion also played a significant role in the buildings of ancient Egypt. Since they believed in the afterlife, they built the tombs out of the best types of rocks and various materials, while they constructed houses out of mud bricks because they wouldn’t be living in in long.