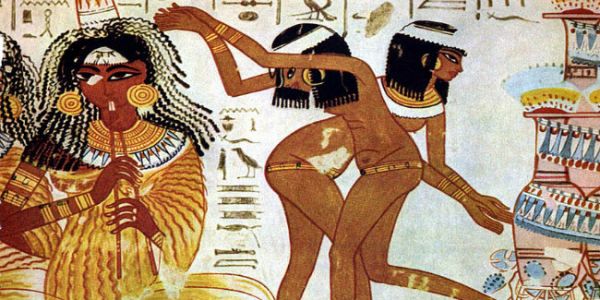 The Pharaohs valued music since the reign of the first dynasty around the year 3400 BC. It is noted in many historical records that the king, priests, and high officials gave special attention to music as it was associated with various religious ceremonies.

There were also some gods that were linked to music and festive like Bes and Hathor. The worship of these gods included different music and dance performances and some dances as well. Moreover, walking around ancient Egypt, you would find people singing and listening to different types of music while cultivating their lands, at home, in royal palaces, and even in wartime.

The Pharaohs even made use of all types of musical instruments. This is besides the fact that music was commonly accompanied by the clapping, chanting, and cheering of the people.

For example, the percussion instruments frequently used in ancient Egypt included different instruments that are still used until today like drums, castanets, and different types of bells.

There was also this instrument that was called the “Sistrum.” It mainly consisted of a medium sized metal piece with the U shape. It used to contain various types of metal pieces attached to it. Moving it up and down or horizontally resulted in various sounds of music.

The Pharaohs used several various wind instruments and free-reed instruments as well. Factually speaking, the wind musical instruments the ancient Egyptian musicians used looked similar to the ones musicians use in contemporary times. These instruments included flutes and trumpets. There were also a number of strings instruments like harps and lutes.

During the reign of the Pharaohs, music was actually a profession where a number of people would earn their living from performing music in various gatherings and activities. The highest levels of musicians in ancient Egypt would usually perform during religious rituals. Certain musicians would reach a stature when they would play specific music that is associated with particular gods.

The royal family members would have their own private professional musicians that would perform music whenever they please. On the other hand, the musicians of the commons used to perform in various gatherings like festivals or even when a large family commune.

As a matter of fact, ancient Egyptians loved and appreciated music of all types. They even had some specific songs written to escort the performed music. Most of these lyrics were written for the gods, kings, queens, and members of the royal family. Romantic songs were not yet commonly recognized.