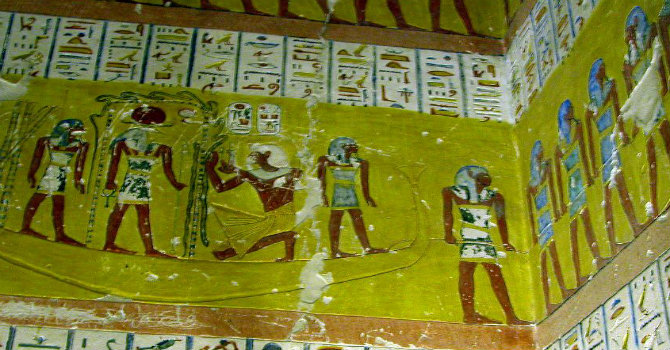 Ancient Egyptians had a quite unique civilization in terms of many various aspects, Clothes & outfits are among them. Uncover Traditional Egyptian Clothing, Pharaohs Clothes, Clothes Worn in Ancient Egypt & What Clothes Did They Wear in Ancient Egypt?

The ancient Egyptians professionalized in producing different types of clothes and outfits putting into consideration many various factors like the color of the cloth, the type of it, and the climate conditions as well.

Many factors played a significant role in the outfits of the Pharaohs. Among the most important elements, there was the climatic conditions. With Egypt’s hot weather, the ancient Egyptians tended to use light types of clothes. Another important factor was the color and since most Egyptians are rather various shades of brown, the white color was among the most common used in ancient Egypt.

Flax was the most common material cloth was made of in ancient Egypt. Although the Pharaohs recognized the existence of many various types of cloths, they preferred cloths made out of flax.

There are a number of reasons why ancient Egyptians chose to wear flax. The first reason is that flax was cultivated in various regions around Egypt with huge quantities. This is in addition to the fact that ancient Egyptians believed that cloth that comes from animals, like wool, is unclean.

However, with time passing by cloths that originate from animals became the clothes of high priests. Afterwards, the high class of the Pharaohs used to wear them as well.

The quality of the outfits and clothes of ancient Egypt largely depended on the social level of the people. The flax the higher classes used to wear was of a much better quality. They also used to wear outfits with much more complicated designs.

The cheaper and thicker types of flax were used by the poorer. They also used to put on shorter outfits in order to facilitate their moving around grass fields and cultivated lands.

It is interesting also to know that it was acceptable for people in the middle and high classes to show their breasts, men and women. Kids for example, of all social classes, used to remain nude until they reach the age of 6 years. The women slaves used to be nude as well most of their lives. The common outfit around the beginning of the 15th century BC included a light sweater, shirt with short sleeves, and a skirt.

The clothes of young women never changed over centuries of time. In the upper classes, the sleeves used to begin from under the breasts with holders put on shoulders. The outfits of the royal family were made out of the best quality of materials and the finest designs. Nobles used to wear crowns like these of the Pharaohs.

The kings, for example, used to wear special outfits in festivals. They used to put on a short shirt with a royal veil. Their outfits were also wonderfully embroidered with colorful threads. The outfits of the judges and ministers of ancient Egypt consisted of a tight dress that covered from their breasts to their legs which was wrapped from behind the neck.

The clothes of the police and army soldiers of ancient Egypt largely varied according to the positon and rank of each individual. The arrow shooters, for example, used to wear a head cover that was distinguished with its green ornaments. While on the other hand, the police used to wrap their hair with a white ribbon symbolizing power and strength.

Some scholars asserted that there were unified Egyptian dress and outfits for all common women in ancient Egypt until the ruling period of the 18th century. All women of all social classes, including the royal family, used to put on tight outfits that show most of their bodies. It was featured with its one-piece robe that was linked to holders that were wrapped around the neck. Many of these outfits had the white color.

Servants used to wear a shirt that covers their neck with short sleeves. They also used to put on a gown while cleaning to make them move easier around the house. On the other hands, dancers used to wear tight and transparent outfits to show off their dancing movements. This is in addition to quite short dresses that were quite appealing.