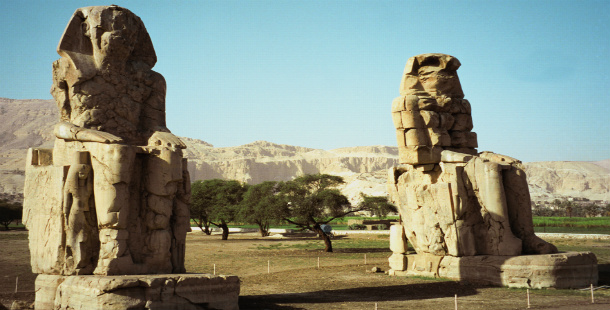 One of the main attractions in Luxor West Bank on the road to the monument area, 2 gigantic statues known as the Colossi of Memnon belong to Pharaoh Amenhotep III. For 3,400 years they have sat in the Theban necropolis.

The Colossi of Memnon Statues of Amenhotep III

On your way to visit the west bank of Luxor, the first monument that you will encounter, before you get to valley, is the two gigantic statues known as the Colossi of Memnon.

The Colossi of Memnon are two massive stone statues of Pharaoh Amenhotep III. For 3,400 years they have sat in the Theban necropolis, across the River Nile from the city of Luxor.

The legend behind their name is interesting, Ancient Egyptians called the southern of the two statues "Ruler of Rulers". Later travelers called them "Shammy and "Tammy", which may have been a corruption of the Arabic words for "left" and "right".

Unfortunately the condition of the statues is not good. This is mainly caused by the soft nature of the stone from which they are made, combined with ancient Earthquake damage.

Both statues are quite damaged, with the features above the waist virtually unrecognizable. Visitors came from miles around to hear the music, including Emperor Hadrian, in 130 A.D. The Roman emperor Septimius Severus, seeking to repair the statues in 199 AD, inadvertently silenced them forever.

They reason that they became famous during the Roman period is that they were said to have sung! Some theories attribute this phenomenon to the expansion of the stone, when the sun warmed it during the day, and then the natural contraction in the cool of the evening.

Egypt Tours Including Colossi of Memnon

Beyond Colossi of Memnon