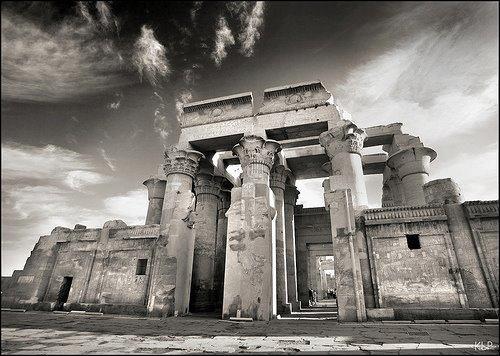 Kom Ombo is located in Upper Egypt on the east bank of the Nile. The origins of Kom Ombo are mysterious, perhaps still buried for future generations to discover. The Temple of Kom Ombo is an unusual double temple built during the Ptolemaic dynasty.

The Temple of Kom Ombo in Aswan Egypt

The Temple of Kom Ombo stands on the east bank of the Nile , right next to the river, about 4Km from the town. It was dedicated to two Gods Temple to Sobek and a Temple of Haroeris.

The temple is unique because it is in fact a double temple, dedicated to Sobek the crocodile god, and Horus the falcon-headed god. They believed that as a totem animal, and object of worship, it would not attack them.

The layout combines two temples in one with each side having its own gateways and chapels. There are two triads in the temple; one belongs to Haroeris, his wife Tasenetnefret, and their son, Panebtawy. The other triad belongs to god Sobek, Hathor and Khonsu.

There are two entrances, two courts, two colonnades, two hypostyle halls and two sanctuaries. There were probably even two sets of priests. The Temple has scant remains, due first to the changing Nile, then the Copts who once used it as a church, and finally by builders who used the stones for new buildings for other projects.

The Chapel of Hathour is located in the North Eastern section of the Temple of Kom Ombo and it consists of a rectangle shaped chapel constructed higher than the ground and reached through climbing some steps.

The best time to visit the Temple of Kom Ombo is either early in the morning, or after 5 o'clock.