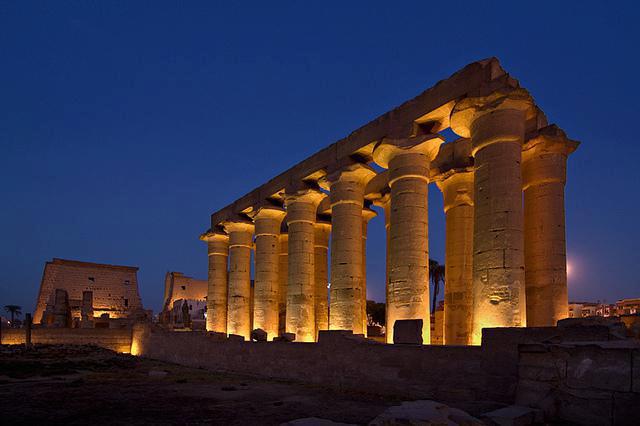 Many festivals were celebrated in Thebes (Waset in ancient Egyptian). The Temple of Luxor was the center of the most important one, the festival of Opet. It appears that the temple's purpose was for a suitable setting for the rituals of the festival.

Luxor is also perfect for tourists who simply appreciate the aesthetic properties of architectural wonders and attractions, which have been a part of the region for several millennia.

Luxor Temple is a large Ancient Egyptian temple complex located on the east bank of the Nile River in the city today known as Luxor and was founded in 1400 BCE.

The Temple of Luxor was the center of the most important one, the festival of Opet. It appears that the temple's purpose was for a suitable setting for the rituals of the festival.

This grand temple is a magnificent structure with many separate sections, each of which was designed with a specific purpose in mind with regards to the festival.

Some of the most famous buildings and attractions include the Pylons, Court of Ramesses II, Mosque of Abu'l Haggag and the Court of Amenhotep II.

At that time the festival, each god or goddess was carried in a separate barge that was towed by smaller boats. Large crowds consisting of soldiers, dancers, musicians and high ranking officials accompanied the barge by walking along the banks of the river.

The festival was the backbone of the pharaoh's government. In this way could a usurper or one not of the same bloodline become ruler over Egypt.

The Temple run close and parallel to the river Nile from north to south. It was constructed on the site of a small Temple of Amon, built by kings of the 12th dynasty. This temple has been in almost continuous use as a place of worship right up to the present day. It is spectacular and so compact it can be visited in an hour.