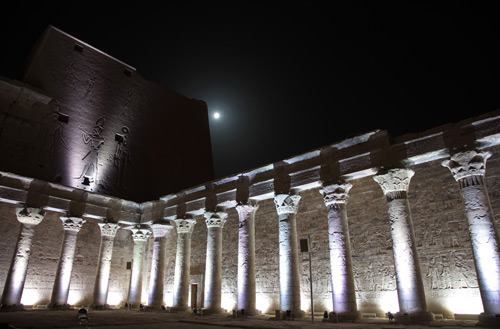 Edfu is located 60 Km to the north of Aswan, today it is an important center for sugar production and pottery. The most important monument in Edfu is the Temple of Horus, it is one of the most beautiful and preserved temples in Egypt & second largest after Karnak.

Who Built Temple of Edfu

The construction of this Temple and its additions, inscriptions, and relief's took about 180 years. Most of the work continued throughout this period during the period of Ptolemy IV and Ptolemy V Epiphanes. The temple was dedicated to Horus, the falcon headed god.

The Ancient Egyptians believed that the temple was built on the site where the great battle between the gods Horus and Seth took place. Edfu Temple has some traditional Egyptian elements, along with a few Greek influences.

Edfu Temple consists of traditional elements of Egyptian Temples of the New Kingdom, together with a few Greek elements. The Temple's inscribed building texts "provide details [both] of its construction, and also preserve information about the mythical interpretation of this and all other temples as the Island of Creation.

It consists of an entrance, a court and chapel. The walls of the mamisi are decorated with scenes showing the story of the divine birth of Horus the child, in the presence of the Goddess Hathor, the God Khenoum and other deities who were concerned with pregnancy and birth.

The pylons of the main Temple are about 118 feet high with typical scenes of the pharaoh in battle with his enemies. Around the inner temple is an ambulatory or corridor carved with more foundation and building texts and also scenes from the Edfu Drama.

The temple is often included on Nile cruise itineraries but can also be reached from Aswan or Luxor, by train or road. The railway station is on the east bank and coaches often only stop on this side too.

The rectangular Hypostyle Hall was built under Ptolemy VII (145-116 BC) and has two rows of six pillars supporting an intact roof. The ceiling has astronomical paintings symbolizing the sky. the Festival Hall, which marks the beginning of the oldest part of the temple, built 237-212 BC under Ptolemy III and IV.

During festivals, this hall was decorated with faience, flowers and herbs and scented with incense and myrrh. Offerings of libations, fruit and sacrificial animals were brought in through the passageway on the right and nonperishable offerings were stored in a room to the left. The room in the back left (northwest) corner is the Laboratory, where recipes for incense and unguents are inscribed on the walls.