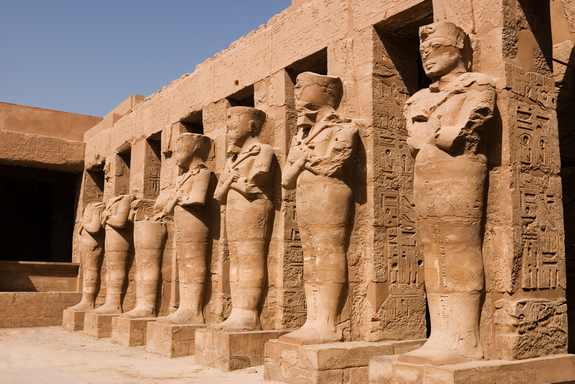 It contains a group of Temples (Great Temple dedicated to Amun Ra, Temple of Khonso, The Ipt Temple, Temple of Ptah, Temple of Montho & the Temple of God Osiris).

It is part of the monumental city of Thebes, it is also the largest temple complex ever built by man, and represents the combined achievement of many generations of ancient builders.

Temple of Karnak is in fact a whole city of temples that were constructed over two millennia ago. The area around Karnak was the ancient Egyptian main place of worship of the eighteenth dynasty Theban Triad with the god Amun as its head.

It is part of the monumental city of Thebes. Although badly ruined, no site in Egypt is more impressive than Karnak. The history of the Karnak complex is largely the history of Thebes and its changing role in the culture.

Religious centers varied by region and with the establishment of the current capital of the unified culture that changed several times. The great temple at the heart of Karnak is so big; St Peter's, Milan and Notre Dame Cathedrals could be lost within its walls.

Its ancient name was Ipet-isut, meaning "The Most Select (or Sacred) of Places". If you don't have the energy to cover all that ground then don't miss the Hypostyle Hall in the Great Temple of Amun.

There are several performances of the sound and light show a night with mixed reviews, but mostly good. Most probably this spot was the site of an old Temple, dating back to the time of the Middle Kingdom.