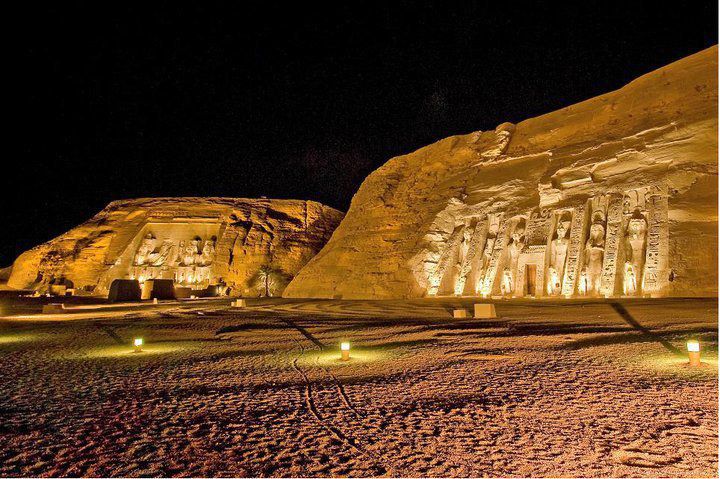 Abu Simbel, site of two temples built by the king Ramses II, located in Aswān Egypt. It is generally considered the grandest of temples commissioned during the reign of Rameses II, one of the most beautiful and among the most interesting Pharaonic Temples.

The Great Temple at Abu Simbel, which took about twenty years to build, was completed around year 24 of the reign of Ramesses the Great (which corresponds to 1265 BCE). It was dedicated to the gods Amun, Ra-Horakhty, and Ptah, as well as to the deified Rameses himself.

The two Temples, that of  Ramesses II and that of Nefertari, bring Ramesses II, Nefertari, Hathor and the Sun God together as one. One for himself and the other for his beloved wife, Nefertari also Called Temple of  Hathor who was the wife of the Sun God so in a symbolic way, It is also a rock-cut Temple with a façade of about 28m long and 12m high, which contains 6 standing colossi, Four of them represent Ramses II and the other two represent Queen Nefertari and two smaller figures of their children.

Inside the Temple there is a hall, supported by Osirid shaped pillars which were cut into the rock, with walls that are decorated by battle and offering scenes. The interior walls are decorated with magnificent reliefs showing the presentation of offerings and festive processions in honor of the pharaoh and his wife.

At the far end of the Temple are the sanctuary, which contains four statues; Re-Hor-Akhty, Amon-Re, Ptah and the deified Ramses II. The complex was relocated in its entirety in 1968, on an artificial hill made from a domed structure, high above the Aswan High Dam reservoir. East facing temple has the sculpture of the Re-Horakhty, the Sun God; excavated on the niche right above the entrance.

The temple is build in such a manner that the rays of the sun illuminate even the innermost sanctuary of the temple and fall on the seated statues of the Ptah, Amun-Re, Ramesses II and Re-Horakhty twice a year.