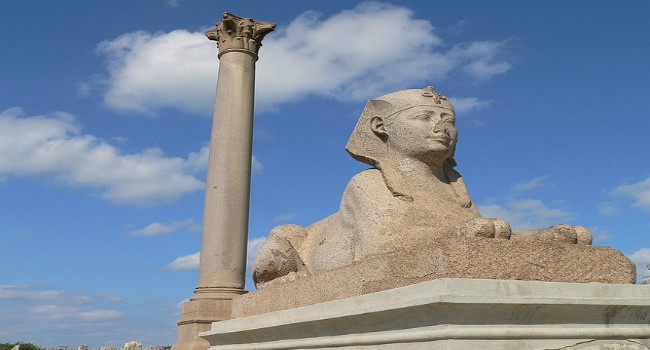 Pompey's Pillar is the biggest memorial column in Egypt. It is 25 meter tall structure of granite, completed in 292 AD and was dedicated to the Emperor Diocletian. Uncover Facts About Serapeum Pompey's Pillar Alexandria History, Plan and Architecture.

It is one of the best-known ancient monuments still standing in Alexandria today. Pompey's Pillar was originally part of a temple dedicated to Serapis located in the same area, a temple of the God Serapis, now badly damaged. It was built during the reigns of Ptolemy II and Ptolemy III, but was damaged due to the revolts of the Jewish population in Alexandria.

It was rebuilt again during the reign of Hadrian (117-137 A.D). It was likely was destroyed, once more, after the appearance of Christianity. It consisted mainly of a high platform accessed by a staircase of 100 steps. Even though most of the Serapeum, or Temple to Serapis is now gone, the site is worth visiting if only to see the grand column known as Pompey's Pillar.

At the side of the platform there was a basin, which was used for purification. There were 2 galleries at the back of the temple, cut completely into the rock. In the 1st gallery a black statue of basalt, the 2nd gallery is known mistakenly as the Daughter Library but it seems that it was a burial for the mummies of Anubis.

The site of the Alexandria Acropolis also features a “Nilometer.” By means of the Shidia canal, which connected the Nile River to Lake Mariut, the Nilometer was used for measuring the height of the Nile during each flooding season.