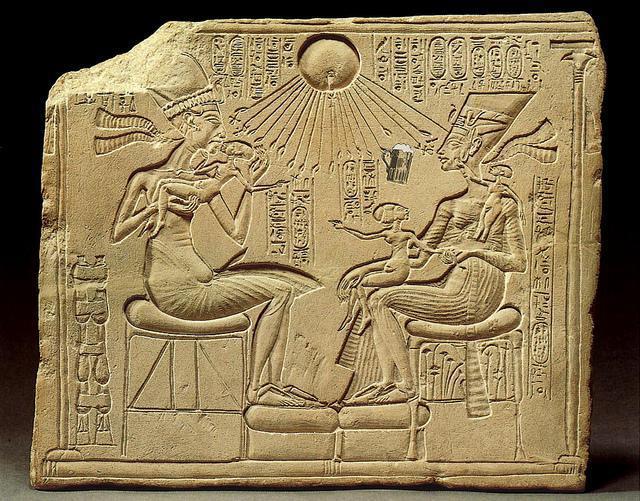 Tell El-Amarna was formally known as Akhetaten. The area is located on the east bank of the Nile River in the modern Egyptian province of Minya, The site has the ruins of Aton Great Temple, sanctuary, palace and residence of the royal family made of mud brick painted in a lively naturalistic style.

It is an extensive Egyptian archaeological site that represents the remains of the capital city newly-established and built by the Pharaoh Akhenaten of the late Eighteenth Dynasty (c. 1353 BC), and abandoned shortly afterwards.

The site was unknown to the European travelers other than its name, which was a village called ET Til el-Amarna. Early visitors misunderstood its name, so it became to be known as Tell el-Amarna, though there are not a single tell, or great mound marking the ancient site.

El-Amarna, like all other ancient Egyptian capitals  was made up of temples, government establishments, utilitarian facilities such as grain silos and bakeries, palaces and common mudbrick homes, several necropolises, as well as a number of zoos, gardens and other public buildings.

The site of Amarna includes several modern villages, chief of which are el-Till in the north and el-Hagg Qandil in the south. The area was also occupied during later Roman and early Christian times; excavations to the south of the city have found several structures from this period.

The area is a plain field, separated from the Nile Valley by a strip of palm trees. It stretches 12 kilometers from north to south. The area is covered mostly with sand and outlined with ruins of temples, palaces and houses that archeologists discovered or are trying to find.

Some tourists considered it one of the most romantic places they have ever seen because of the silence and the peaceful beauty that the area gained through the centuries. There are more than twenty five tombs facing the base of the cliff front. Six tombs are located at the north side near Darb El-Malik. Nineteen of them are located at the south side.  These tombs were built highly complicated to protect them from the thieves, therefore a visitor could get lost.

Today, Tell El-Amarna is considerable research continues at this location that should eventually uncover more of the secrets of the most interesting pharaoh's reign.