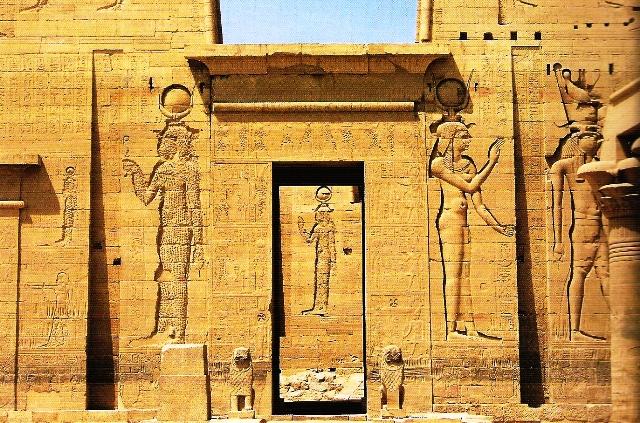 Philae Temple is of the main sites visited by almost every tour to Egypt, Philae is actually a nonexistent island now buried beneath Lake Nasser and the previous site of an Ancient Egyptian temple complex in southern Egypt.

It is believed to be the former center of worship to the goddess Isis during the Ptolemaic period of Ancient Egypt.

The Ancient Egyptians built a beautiful and magnificent Temple on this island for the Goddess Isis and her connection with Osiris, god Horus, and the Kingship, during the Ptolemaic period of Egyptian History.

The ancient Egyptians saw in their name for Philae an etymology with the meaning "island of the time [of Ra]", i.e. creation, but the islands history is later than that. it was a barrack also for Macedonian and Roman soldiers in their turn. Philae Island was a rocky island in the middle of the River Nile, south of Aswan but the Temple became submerged after the first Aswan dam was built in 1906, and it was not until the seventies that many nations attempted to save the Temple.

All these countries, together with UNESCO, selected a suitable place, but they had to wait until the completion of the High Dam, in 1971, which would stabilize the level of the water around their chosen island. The first pylon consists of two towers and a central doorway, which was decorated with reliefs by Nectanebo.

The east colonnade is unfinished, with only 6 of 16 columns completed. The others are roughly hewn with unfinished capitals. West of the forecourt, just behind the first pylon, is the Birth House (Mammisi). This was dedicated to Hathor-Isis in honor of the birth of her son Horus and was where the king conducted rituals securing his legitimate dependency from Horus.

The second pylon is 105ft (32m) wide and 40ft (12m) high and covered in reliefs. Those on the central doorway are by Euergetes II. Temple of Isis itself, which consists of a court, a vestibule, several antechambers and the inner sanctum where the sacred image of Isis was kept.

The new island was called Egilica (also called Agilika), and it was completely reshaped to imitate Philae Island as closely as possible. Each and every stone had to be numbered, and then replaced, in the same position, in the new location. It was a massive, and very complicated. The temple has several shrines and sanctuaries such as Kiosk of Trajan’s or Pharaoh's Bed. Visit Philae temple at night to attend the Sound and Light show.