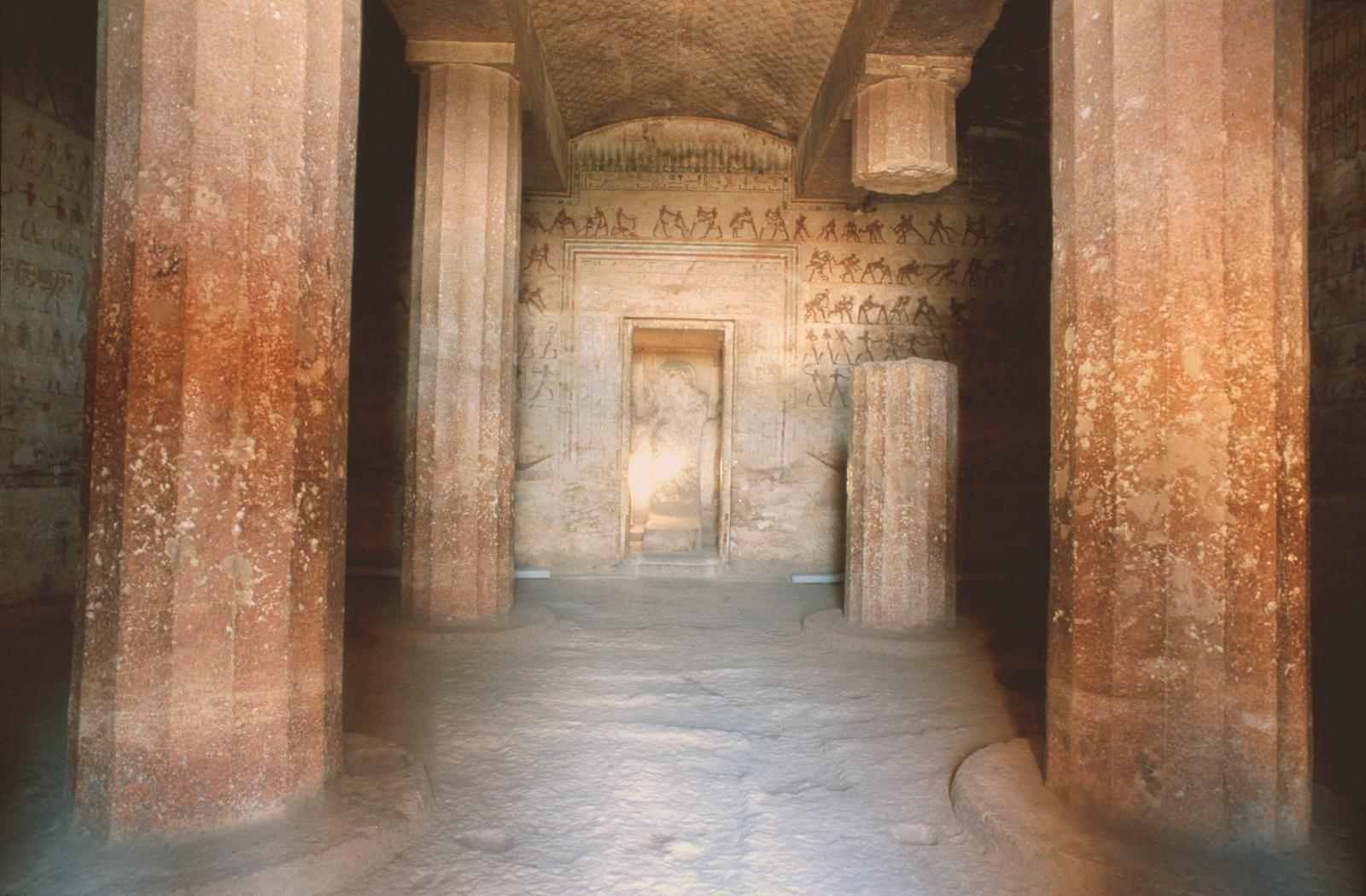 Beni Hassan is an archaeological site carved into limestone rock 245 Km south of Cairo. Beni Hasan tombs are consisted of 39 tombs with daily life scenes for the military ‎leaders and local rulers of ancient Egypt during the Middle Kingdom from 2055 to 1650 BC.

Beni Hasan (also written as Bani Hasan) is an Ancient Egyptian cemetery site. The site lies on the Eastern Bank of the Nile, 20 km south of the city of Al-Minya. While there are some Old Kingdom burials at the site, it was primarily used during the Middle Kingdom, spanning the 21st to 17th centuries BC (Middle Bronze Age).

It houses 39 rock-cut tomb decorated with scenes depicting local and regional life during the Middle Kingdom. Many of these have scenes of violent warfare and military training. To the south of the cemetery is a temple constructed by Hatshepsut and Thutmose III, dedicated to the local goddess Pakhet.

It is known as the Cave of Artemis, because the Greeks identified Pakhet with Artemis, and the temple is subterranean. The Tombs of  Beni Hassan, this Ancient Egyptian cemetery was used and built for provincial governors during the Middle Kingdom over an older burial site used during the Old Kingdom period.

The tombs reflect shifts in political power between the pharaoh and governors. When pharaohs were weak governors became powerful hereditary rulers and when the pharaoh centralized power, they appointed the governors. There are 39 ancient tombs here of Middle Kingdom nomarchs of the Oryx nome, who governed from Hebenu.

The most important are the tombs of Kheti, Baqet, Khnumhotep and Amenemhet. These tombs have great reliefs that depict fishing, hunting, weaving, bird trapping, travel and warfare. You’ll also see rare full frontal face illustrations that are outstanding. Tombs of Amenemhet : one finds one of two inscriptions within the necropolis that help define Egyptian life in this period.

It consists of thirty-two lines on the door. His tomb is unusual for having a false door on the west, where the dead are suppose to enter. Tomb of  Khnumhotep: his tomb is beautifully done with scenes of daily life. His biographical inscriptions within the tomb are 222 columns of text and help define Egyptian life during this period. There are also acrobats over the door. This is only a brief description of the tomb of  Khnumhotep II. Within all of the beautiful painted scenes, many of which were not discussed here, are several underlying connotations to the ancient Egyptian beliefs about the afterlife.